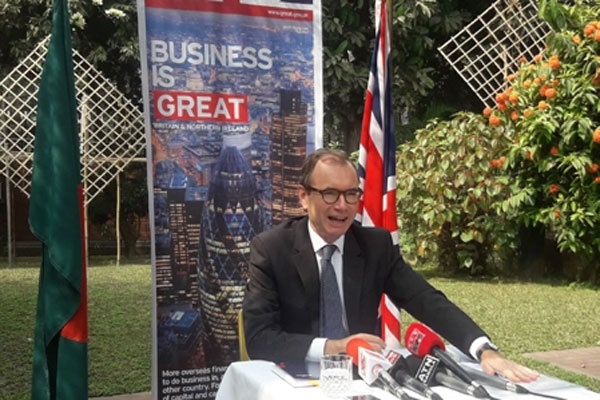 The UK will continue to provide Generalised System of Preferences (GSP) facility for Bangladesh for three more years even after its graduation to a developing country from the least developed one.

British High Commissioner to Bangladesh Robert Chatterton Dickson on Wednesday said the UK will provide Bangladesh with the GSP facility up to 2027 so that it can prepare to face new economic challenges after the graduation from the group of Least Developed Countries (LDCs).

The British high commissioner was talking to a group of journalists at his residence on the outcome of the first-ever UK-Bangladesh Trade and Investment Dialogue held at the Commerce Ministry in Dhaka on Tuesday.

In the dialogue, the British government was represented by Robert while the Bangladesh government by Commerce Secretary Dr Md Jafar Uddin.

The UK has started negotiations with its major trade partners, including Bangladesh, all over the world as it has left the EU.

According to officials, like the European Union, the UK will continue the GSP for Bangladesh under the Everything But Arms (EBA) scheme. The EU has said it will provide Bangladesh with the GSP facility up to 2027.

The UK is the third largest export destination of Bangladesh which ships goods worth 2.8 billion Pound Sterling (GBP) to the European country every year.

On the other hand, the UK’s export to Bangladesh is 643 million GBP. So, the bilateral trade is heavily in favour of Bangladesh.

He said Bangladesh provides fantastic opportunity for investors, but improvement of regulatory issues in conducting business must be addressed.

He also urged the authorities to make the country’s financial and education sectors more open to foreign investors.

Insurance, stock exchange and capital market are some areas of the financial sectors where British investors have interest, Robert mentioned. “I want to see the Bangladesh market more open to the best of British investment and expertise,” he added.

According to the British envoy, many systems here need to be evolved to be globally competitive and world class to be a fully-fledged developing country.

He said inability to enforce contracts, bureaucracy and coordination with different parts of the government pose problems to foreign companies.

Highlighting the prospect of Bangladesh for becoming a top investment destination, he said as per an HSBC survey, Bangladesh is one of the top performers in Asia.

“During pandemic, the country manages to maintain positive growth and I believe that the country’s economy will continue to grow after the pandemic is over,” the high commissioner said.

Talking about the British investment in the education sector, he told reporters that at least nine UK universities want to set up campuses in Bangladesh to provide higher education of international standard.

"At least nine UK universities are keen to come to Bangladesh and open campuses. They can provide world class education, especially in technology and management, the areas that are most needed in the industries in Bangladesh," he added.

The British envoy also said they are yet to receive any positive response from Bangladesh's University Grants Commission (UGC). Possibly, local private universities have a strong position regarding foreign universities coming to Bangladesh.

Robert explained that a lot of Bangladeshi students go abroad, including to the United Kingdom, for higher studies, but they can have the same quality of education in Bangladesh if UK universities are allowed to operate in the country. "This will save money as well as brain drain that happens otherwise," he said.