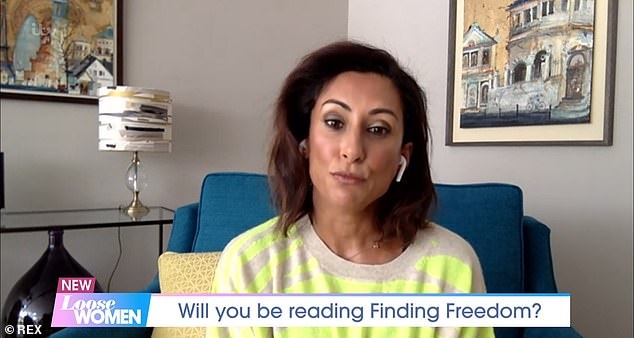 'I've had vitriol on a daily basis': Saira Khan admits she 'didn't expect' to receive 'extreme hate' for revealing she's no longer a practising Muslim after reporting death threats to police

Saira Khan has revealed she 'didn't expect' to receive 'extreme hate' after publicly announcing she's no longer a practising Muslim.

The former Loose Women star, 50, had previously spoken about her decision to renounce Islam last week, and since revealed she's been forced to report death threats to the police.

Writing in her column for The Mirror, Saira said she's been faced with 'daily vitriol' in the wake of her decision to step away from her faith, following years of feeling 'guilty, caged and unhappy.'

She also stated that she was 'taken aback' by how it had been reported in the media in Pakistan, where her parents are originally from.

Saira wrote: 'I have since received vitriol on a daily basis. I could understand it if I were selling drugs, abusing, grooming, being blasphemous or Islamaphobic, bullying, stealing, being violent or aggressive, but I've done none of those things - so why?'

The TV personality then suggested that the reason she received such hatred is not because of her decision to become a non-practising Muslim, but rather because she 'made her declaration as a woman'.

She went on: 'Whether we like it or not, some cultures, like the South Asian one from where my parents originate, is based on the patriarchy.

'And many of those countries are populated by Muslims, so it's easy to see why religion and culture are so entwined.'

Saira explained that in Pakistan, the woman is expected to remain at home as a mother and wife, while the man goes to work and becomes a 'breadwinner'.

She stated that the idea of gender inequality 'is an accepted norm for many Pakistanis', and if a woman decides she is not okay with her way of living, then 'the whole system is under threat'.

After sharing horrific messages she had received from trolls, Saira told her followers  on Tuesday she had reported the matter - regarded as hate crime - to the police.

She wrote: 'Due to the abuse and threats I have received. I have reported this matter to the police as it is regarded as hate crime.

'I am utterly saddened that my decision to live my life how I choose should resort to others wanting to cause me harm.

'How does my life choice impact theirs?'

Saira later posed for shots in her underwear as she revealed she was focusing on the positives amid the turbulent time in her life.

She said: 'It's a new day to smile. To love. To be grateful. I cannot control other people's actions, or emotions towards me.

But I can control my response to them. I choose to smile. Be kind. Be in control of what I can.

'There is no point in worrying about what could or might happen if you choose to live your truth.

'A day worrying, is a day wasted. I don't have days to waste. Everyday counts in a life you only live once. Happy thoughts everyone.'

During an Instagram Live on Monday, the star insisted she's 'not perturbed' by the vile abuse as she declared: 'I have to live my life.'

The journalist also uploaded a screenshot of a horrific message she received from a troll in a bid to help others in similar situations who may be 'too scared come out about it.'

TV star Saira addressed the backlash she's been met with after her revelation as she said: 'I have had death threats...

'Until you come from that background or ethnicity as a woman, you will never understand the barriers the obstacles - the deaths to your life, we are about 100 years behind in terms of freedom of speech freedom or individualism, liberty and choice.

'You cannot believe the messages I have received. I am not going to come out and say I practise the religions because I don't.' (sic)

The media personality further explained her reasoning behind leaving the faith as she shared: 'I don't believe in certain aspects of the teachings.

The former Apprentice star added that while she's not fearful about uploading criticism online, she's 'frightened' that trolls 'want to come and kill you' for being yourself.

One of the offensive notes read: 'You f***ing dirty s**g, In'sha'Allah Allah gives you the punishment you deserve you fat ugly w***e.' (sic)

Saira elaborated: 'We must not be fearful to live our lives because of external threats. Otherwise, the world will never change.

'I am not afraid to share these threats with you because if it's happening to me it's happening to other women and they are too scared to come out about it. It doesn't frighten me, it doesn't perturb me and you know, because I live in Britain and believe the majority of people are good.

'I have so many messages on my messages saying they do not represent the true Islam. The majority of people just stay quiet and I say you have to step up.

I am frightened about that in a country with free speech, they want to come and kill you for it.' (sic)

In her interview about the religion, the panellist revealed she was led to share her life update after receiving a 'disgusting message from a troll' as she declared: 'This was the last taboo to overcome before I could live my best life.'

She said: 'Saying I'm Muslim and then having a boyfriend, wearing clothes that go against the Muslim dress code, having a drink and living a non-Muslim life only brings guilt, self-loathing, loneliness and a feeling of being caged.'

The reality star confessed she doesn't want to 'inadvertently confuse, represent or unintentionally hurt others' of the Muslim faith after being met with assumptions about fasting for Ramadan, not drinking and abstaining from sex before marriage.

Saira also clarified that while some Muslims 'are the most humble people I know' and most of her values are based on the 'spiritual aspect of the faith', she's influenced by other teachings and has only been 'hurting' herself by 'living a lie' for her loved ones.

The social media star added to The Mirror: 'It has taken me till the age of 50 to find the courage to say it. I'm doing it now for my own wellbeing. I want to be honest and feel free to live my life by my own rules. I have found a huge relief in being honest.

'I know that one of the reasons I have been so angry and unhappy in my life is because of the many contradictions I've had to live with. I've not dared to share these feelings before because the very few Muslim women who have are called sinful and some have even been targeted with death threats.'

Fundamentalist Muslims regard apostasy, or leaving Islam, as a sin deserving of death.

Pakistan also has the death penalty for criticising the faith, as well as any recognised religion.

In December 2019, the mother-of-two, who is of Pakistani heritage, revealed she was branded a 'racist' and 'white sell out' in the past for speaking against radicalisation.

The presenter, who has been trolled for sharing topless selfies to Instagram in the past, said that although it's 'difficult' for her to discuss her community, she feels some are ignoring British cultural norms.

The Long Eaton native said on Loose Women: 'It's very difficult for me sometimes to sit here and talk about a culture that I belong to. But I have to do it because this is my country. I was born here and I am British.

'I love living in a multi-cultural society, but I think we all have to wake up and see we are living by cultures, side my side, where they are flouting British values and we're allowing people to get away with it.

'We're allowing people to get away with it us because we're not an integrated society.

'I've been speaking about radicalisation of young people in this country since the 1980s and when I talk about it, I'm a 'racist' or I get told by the community I'm a white sell-out.

'That's what happens, so I can't physically do something myself. I am giving you an insight into parts of the community where things are not right.'

Saira, who shares son Zac, 12, and daughter Amara, nine, with businessman husband Steve Hyde, was nominated for the Services to Media award at the British Muslim Awards in 2013 and 2015.

The broadcaster, who has blocked some members of the panel on Instagram, previously said she felt there were bits towards the end of her stint on the show which she 'didn't feel were part of the sisterhood'.

She told HELLO!: 'There were elements both on screen and behind the scenes of being a Loose Woman that towards the end I didn't enjoy and I didn't feel like it was part of the sisterhood.

'It wasn't make me happy so I had to bow out, look after my mental health and give someone else my platform.

'I had a great five years and I did what I wanted to with my platform, which was share my stories and experiences being from a minority background, there's nothing more I can say that's new.'