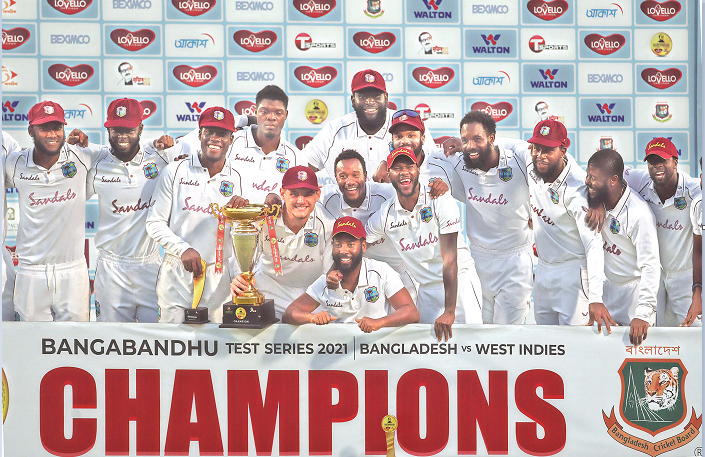 Bangladeshi cricketers probably didn’t want to spend the valentine’s day without the dear ones as they were forced to remain away from them for the bio-bubble restrictions for quite a long time.

Only Mehidy Hasan showcased a late effort to return home with a smile on his face but it actually went in vain after Bangladesh conceded a 17-run defeat against West Indies at the Sher-e-Bangla National Stadium on Sunday.

Bangladesh failed to chase 231 runs in the fourth innings against the visitors as they were bundled out for 213 runs after on-field umpires extended the day’s play for more than half-an-hour on the fourth day of the second Test.

The result means, West Indies, who were tagged as underdogs before the start of the Test series after getting clean swept in the ODIs, took sweet revenge by earning a similar feat of 2-0 against Tigers in the two-match Test series.

A young Caribbean side has managed to do something that many Test stalwarts have failed to achieve in the recent past. Underdog stories always make the headlines and this will one remain in the centre for quite a long time.

Kyle Mayers, Nkrumah Bonner, Rahkeem Cornwall and the several other members of the Test squad came to the party in typical calypso style when their team needed them and they played in an unrestrained manner and that freedom provided results.

They shunned their inhibitions and threw away negativity that came their way after their ODI series loss and made a statement that has been written in golden letters.

Bangladesh lost the opening Test by the heroics of Mayers while in the second match, Cornwall turned out to be too heavy for them as the mountain-man grabbed nine wickets, that helped him earn man of the match.

Cornwall surely deserves to be applauded as he bowled 50 per cent of their overs alone and that too in so many long spells without losing his concentration.

Bangladesh opener Tamim Iqbal always speaks about batting with positive intent and it could not be displayed in a better way than what he did against the visitors to set the tone for the home.

However, his innings ended rather prematurely as he tried to chip off his toes to a full-length delivery offered by skipper Kraigg Braithwaite (3-25).

It invited him, who made 44-ball 50 with the help of nine fours, to drive only to be ended up becoming a catch to Sheyne Moseley that he had taken inches above the turf.

Bangladesh required 161 more runs to win when Tamim got dismissed with eight wickets still in hand and the onus was on the middle-order to make a comeback.

But they never looked to be in the hunt in the wicket where there was surely some turn and bounce for the spinners but certainly it was not unplayable by any means.

Mehidy, who made 31 runs with three fours and two sixes, tried his best to take Bangladesh to an impossible victory but finally his resistance came to an end as he edged one from Jomel Warrican (3-47) to the first slip and Cornwall (4-105) took a diving catch to end the match.

Bangladesh lost seven wickets in the last two and half hours of Dhaka Test to suffer back-to-back defeat in the series.

Bangladesh earlier got some success through their bowlers as they bowled West Indies all out for 117 runs in their second innings.

West Indies, who resumed on 41-3 on the fourth day, lost their remaining seven wickets for just 76 runs to set a 231-run target for the hosts.

Pacer Abu Jayed (2-32) dismissed night-watchman Warrican for his overnight score of two and then sent back Mayers out for six in a quick time.

Both the batsmen were judged leg-before before Taijul Islam (4-36) dragged Jermaine Blackwood forward for stumping on nine.

But Bonner and Da Silva took their lead past the 209-run mark, the previous highest successful run-chase total in the fourth innings of a Test match in Mirpur.

Bonner, who was playing for a long time tried to play a reverse sweep against Nayeem Hasan (3-34), missed the ball and the off-spinner hit the timber.

Mushfiqur Rahim took a fine catch in the deep mid-wicket region to dismiss Rahkeem Cornwall for one to bowl out the visitors.

The defeat for Bangladesh is just their second in Dhaka since August 2015 and the result was enough to stun Bangladesh Cricket Board high-ups and forced BCB President Nazmul Hassan Papon to accompany the cricketers in the dressing room.