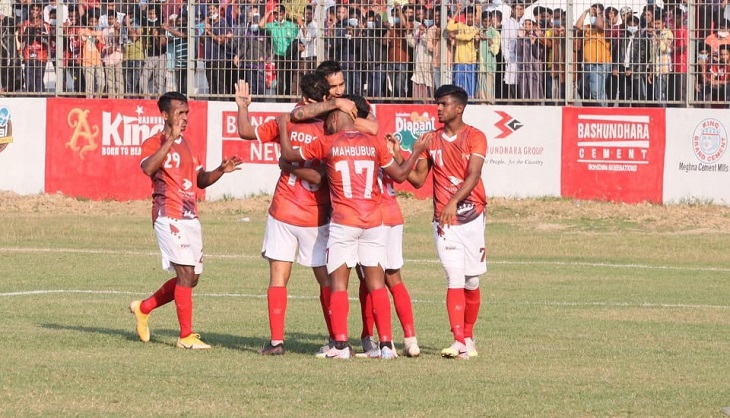 Defending champions Bashundhara Kings are looking to extend their lead in the point table of the ongoing Bangladesh Premier League as they face second-placed Sheikh Jamal Dhanmondi Club in their eighth match Saturday at the Bangabandhu National Stadium.

“It will be a tough match. They (Sheikh Jamal) are in second place. But we are well-prepared and looking to bag full three points,” he said.

Kings’ players took part in a training session at its premises on Friday morning.

Nipu confirmed that all the players are fit and confident enough for the victory.

The current BPL champions have a fresh sweet memory against Sheikh Jamal as they beat them by 2-0 goals in their last meeting in the Federation Cup quarterfinals at the same venue last January.

Third-placed Sheikh Russel Krira Chakra will lock horns against Saif Sporting Club at the BNS while Arambagh Krira Sangha will host Dhaka Abahani Limited at the Birshreshtha Flight Lieutenant Matiur Rahman Stadium in Munshiganj in the day’s other two matches.

On Friday, Uttar Baridhara Club played a 1-1 draw against Bangladesh Muktijoddha SKC at the Shaheed Ahsan Ullah Master Stadium in Tongi. Both sides have the same four points after playing seven matches each.