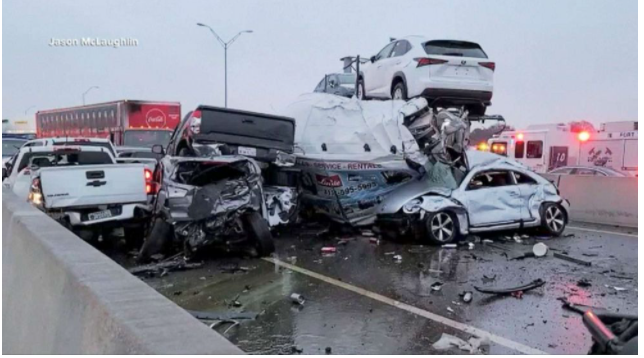 At least six people are dead from a massive freeway pileup in Fort Worth, Texas, according to Fort Worth police.

Over 100 vehicles were involved in the crash on I-35, and multiple people were trapped in their cars, the fire department said.

Sixty-five people were hurt in the accident, which was reported shortly after 6 a.m., authorities said.

Thirty-six people were transported from the scene, including three who were in critical condition, police said. Numerous patients were treated and released on scene, police said, while others left the crash site on their own but later went to hospitals.

All victims assessed on-scene were adults, officials said.
Fort Worth police said ice was likely a factor. Freezing rain has caused slick roads in the Fort Worth area.

"My heart is breaking for our community as we come to learn about the extent of the losses we are experiencing from today’s accident. Our community is pouring out support, and I know that so many of you are asking for a way to help," Fort Worth Mayor Betsy Price tweeted. "Right now, what Fort Worth needs most is your prayers -- for the families, the injured, and the first responders."