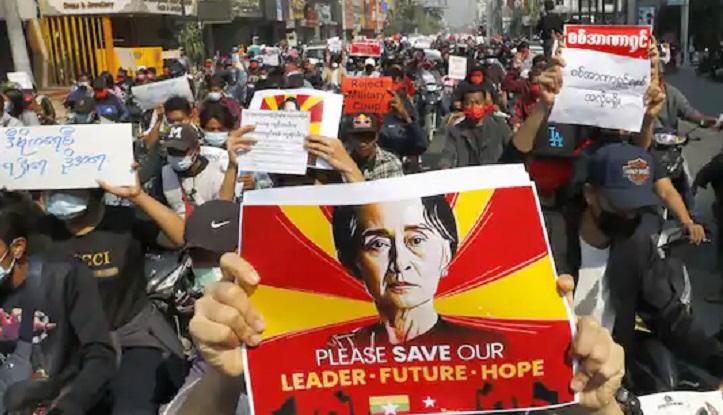 The United Nations demanded Friday that Myanmar's military return power to civilian control and refrain from violence against protesters, warning that abuses would not go unnoticed.

It also voiced concern over sanctions being imposed following the February 1 coup, stressing they needed to be "carefully targeted" to avoid harming vulnerable people.

The UN's top rights body was holding a relatively rare special session urgently requested earlier this week by Britain and the European Union to address the coup and its aftermath.

UN officials and diplomats alike voiced alarm at the assault on democracy in the country and violence against protesters.

Al-Nashif decried the detention of the Myanmar's elected civilian leaders, including Aung San Suu Kyi and President U Win Myint, and of more than 350 others, including officials, activists, journalists, monks and students.

In addition, she lamented, "draconian orders have been issued this week to prevent peaceful assembly and free expression".

"Let us be clear: the indiscriminate use of lethal or less-than-lethal weapons against peaceful protesters is unacceptable," said al-Nashif.

Min Aung Hlaing, the head of Myanmar's army, known as Tatmadaw, has justified his coup by alleging widespread voter fraud during November's election.

And Myanmar's ambassador to the UN in Geneva, Myint Thu, insisted to the council Friday that "in light of the post-election irregularities... Tatmadaw was compelled to take the state responsibilities".

He said the country was "undergoing extremely complex challenges", and looked "forward to receiving better understanding... and constructive engagement and cooperation from the international community".

"Attempts to whip up hype around the situation in Myanmar need to cease," Russia's ambassador Gennady Gatilov told the council.

However, most diplomats taking part in the mainly virtual session spoke out strongly against the coup, mass detentions and use of force against some protesters.

"This unacceptable and illegitimate seizure of power abruptly turned back the clock of history in Myanmar," Portugal's ambassador Rui Macieira said. Speaking on behalf of the EU, he added: "The will of the people must be restored."

Britain's Asia minister Nigel Adams told the council: "The state of emergency and all restrictions on the rights and freedoms of people in Myanmar must be lifted immediately."

The United States, which only re-engaged with the council this week after former president Donald Trump withdrew in 2018, also harshly condemned the coup.

US diplomat Mark Cassayre said all those "unjustly detained" should be released, and called for "accountability for those responsible for the coup, including through targeted sanctions".

President Joe Biden announced this week that his administration was cutting off the military's access to $1 billion in funds, with sanctions targeting Min Aung Hlaing and other top generals.

Al-Nashif voiced concern over sanctions imposed in the wake of the coup.

"Any sanctions under consideration should be carefully targeted against specific individuals who are credibly alleged to have violated the people's rights," she said.

"Leaders of this coup are an appropriate focus of such actions," she said, adding that "it is of critical importance that no harm should be inflicted on the most vulnerable people in the country".

The UN special rapporteur for Myanmar, Thomas Andrews, also called for targeted sanctions, and stressed that any aid should go directly to Myanmar's civil society instead of being filtered through the junta.

And he called on private companies to refrain from doing business with the military "to avoid the risk of being complicit in gross human rights abuses".

During Friday's special session -- the 29th held in the council's 15-year history -- diplomats will consider a draft resolution which demands the immediate release of Suu Kyi and the "restoration of the democratically-elected government".

It stops short, however, of calling for sanctions.