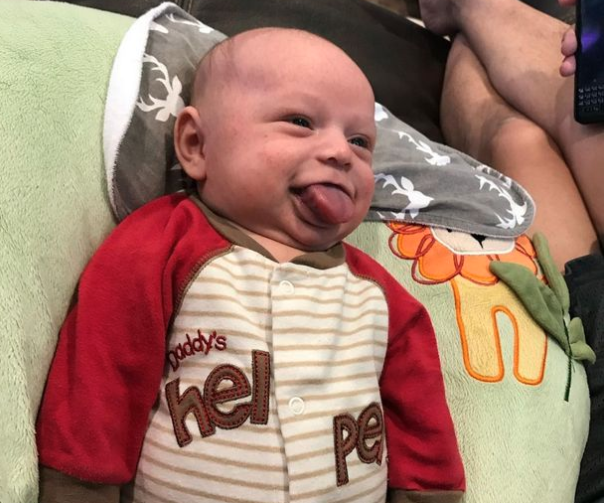 A boy born with a tongue four times too big for his mouth faces surgery as doctors fight against the clock to stop the ever-growing organ.

Three-year-old Owen suffers from a rare disease called Beckwith-Wiedemann Syndrome (BWS), a condition that affects one in 15,000 babies.

Doctors first thought Owen's tongue was "just a little swollen" but further tests revealed that the organ was obstructing the child's airway.

Owen underwent a lengthy surgery to remove two inches from his tongue so that it didn’t take up his entire mouth cavity.

Despite the surgery, Owen's tongue continues to grow and doctors are now trying to find a way to slow the growth before it's too late.

His mum, Theresa Thomas, 30, from Pennsylvania, US, received the diagnosis for her toddler in 2018, just two weeks after he was born.
“Owen was officially diagnosed at the Children’s Hospital of Philadelphia by their BWS genetics team," Theresa, who owns a small business, said.

“I knew in my heart that this is how Owen was made and that he had BWS but even though I knew it, it didn't make the official diagnosis any easier.

“I remember feeling sick to my stomach and I almost vomited at the appointment.

“The syndrome was discovered in the 1960s so there is still so much they don’t know.”
Barring a few scans that showed her son was measuring extremely large, Theresa experienced an otherwise normal pregnancy.

She said: “He was born via C-section, because he was so large they had a difficult time controlling my bleeding.

“My umbilical cord and placenta were also much larger than normal. I wound up losing a lot of blood during delivery and became anaemic.

“His tongue was enlarged at birth and they brushed it off and said they thought it was swollen.

“But my nurse told me that I should push the issue and the doctors started to investigate whether he had signs of BWS.”

Owen was allowed back home but Theresa and her husband were forced to use a breathing apparatus to monitor him at all times – the results of which spurred plastic surgeons into taking action.

The mum said: "In the beginning, I basically didn't sleep.

“Luckily, while we waited for him to see plastic surgery, we purchased the owlet sock to monitor his oxygen levels while he slept.

“I am so thankful we bought that little device. It alarmed me a few times telling us he wasn’t getting enough oxygen while he slept.

“It saved his life on multiple occasions.”
Following the initial operation, Owen spent 10 days in hospital.

The experience was tough for his parents, who coped in different ways – which caused issues in their marriage.

The future for children battling BWS is uncertain, which has also left Theresa with anxiety problems.

Theresa said: “The recovery was probably harder on me and my husband Mike than it was for Owen.

"We had very different ways of dealing with it.

"He handled it by acting like everything was fine, which was difficult for me so we had a lot of arguments in the beginning.

"However, over time we grew and learned how to communicate and be there for one another despite the fact that we handled his disease differently.

"I've felt helpless at times. You never want to see your child going through pain.

"It’s one of the worst things to witness as a mother, however, I have learned so much about the strength our son possesses.

"It’s truly amazing to see how much he accomplishes every day.