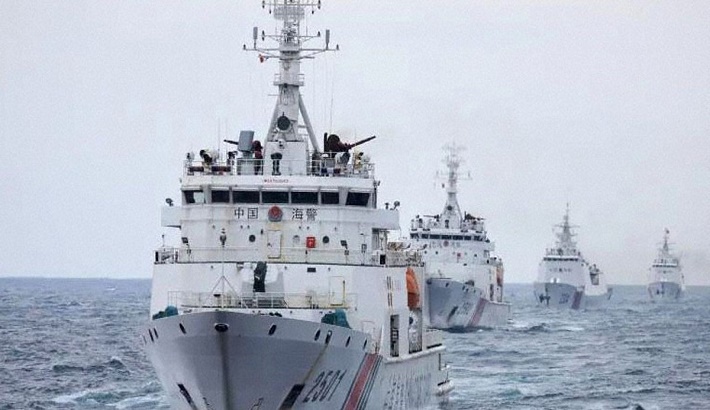 Japan conveyed its 'strong concerns' to China over Beijing's new law that allows its coast guard to use military force in waters the country claims, during a video meeting on maritime issues on Wednesday, reported the Japan Times.

China must not use the legislation, which went into force Monday, in a way that goes against international law, Chief Cabinet Secretary Katsunobu Kato said at a news conference.

In the high-level consultation on maritime affairs involving senior bureaucrats from the two countries, Japan "firmly urged" China to exercise restraint in its actions, said Kato, the government's top spokesman.

The new controversial law permits the China Coast Guard to use weapons when foreign ships involved in illegal activities in waters claimed by the country fail to obey orders. The new legislation also allows it to demolish buildings constructed in those areas by foreign organizations or individuals.

The legislation passed by China on January 22 has become a thorny issue in already strained Japan-China ties.

Japanese Prime Minister Yoshihide Suga, in order to prepare Japan's defences against the Chinese aggression, made a call to the US President Joe Biden last month wherein it was agreed that Article 5 of the Japan-US security treaty covers the Senkakus, meaning that the United States would defend Japan in the event of a conflict there, reported the Japan Times.

Beijing immediately lambasted the declaration by the two leaders, arguing the islets are "China's inherent territory."

Beijing claims that the Senkaku Islands in the East China Sea, which are administered by Tokyo, are part of its territory. The new law could be used to target Japanese vessels navigating around the uninhabited islets that China calls Diaoyu, reported the Japan Times.

In the early 2010s, China and Japan were mired in a territorial row over the Senkakus. Beijing has rapidly built up artificial islands with military infrastructure in the region, claiming sovereignty over almost the entire maritime region.

Moreover, China has conflicting territorial claims with four of the 10 members of the Association of Southeast Asian Nations -- Brunei, Malaysia, the Philippines and Vietnam -- as well as Taiwan in the South China Sea.

Meanwhile, US warships carried out freedom of navigation operations in an apparent bid to challenge Chinese claims and actions in the area.