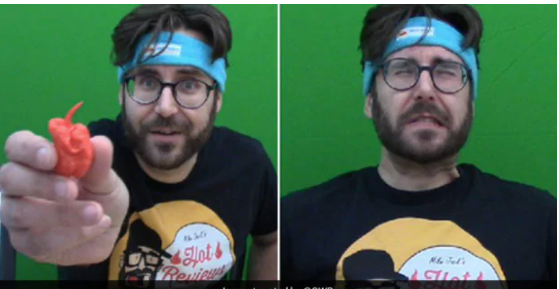 Mike Jack, a Canadian chilli-eater, holds 4 Guiness World Records for eating the hottest chillies in the world. His latest achievement was eating 3 Carolina Reaper in less than 10 seconds.

Chillies add flavour, aroma and some extra zing to a dish, hence, we all love adding this hot ingredient to almost every dish we cook daily. There are some daring ones who eat green chillies as is on daily basis. But have you ever thought of having red chillies as is, that too without pairing it with any dish?

Sounds impossible, right? Here's a man from Canada who not only made it possible, but also broke the world record of having the hottest chilli in the world - Carolina Reaper - in less than 10 seconds! Guinness World Records recently took to their Twitter handle to announce that Mike Jack, who also holds multiple world records, recently ate three Carolina Reaper chillies (each weighing at least 5 gram) in 9.72 seconds.

For the uninitiated, Carolina Reaper has been officially announced the hottest chilli pepper in the world.

With this, he "has set an extremely spicy record that hasn't been broken for six years", read the official statement by Guinness World Records (GWR). Mike attempted this record from home in Ontario on November 21, 2020. According to the official GWR website, Mike's wife was the eyewitness, coach and timekeeper for the record.

A report on GWR website reads, "Mike is currently aiming for eight chilli eating records, and with this latest achievement under his belt, he is halfway to reaching his goal."

Earlier, Mike Jack entered into several chilli eating completions and has 3 records before the latest achievement.