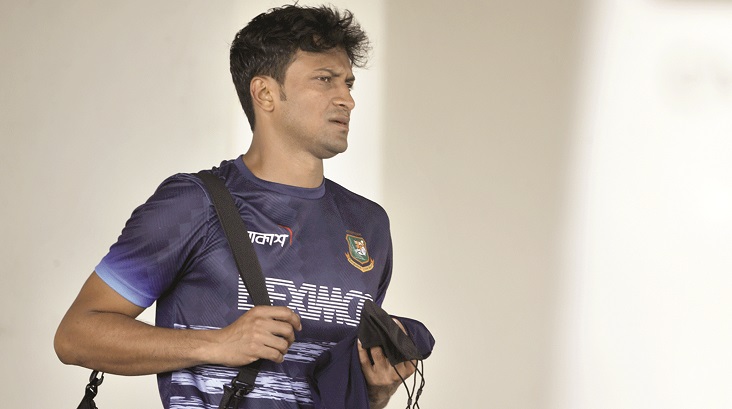 Bangladesh team management looked elated as Shakib Al Hasan looks to be getting into the groove after recovering from his injury following his stint with bat and ball in an individual training session at the Zahur Ahmed Chowdhury Stadium in Chattogram on Sunday.

While the whole team enjoyed rest day, Shakib started his practice on January 30 for the first time though it was limited only to batting and that too in a cautious way considering he is coming from a groin injury that he picked during the last game of the ODI’s series.

Bangladesh head coach Russell Domingo was delighted to have Shakib in the net sessions, as the icon player completed five overs spell in the nets and appeared to be in perfect shape ahead of the Test series.

Team management was worried and conscious about his condition considering the first Test is just three days away and if consider his practice session he seems to be quite fined as he also batted for approximately 50 minutes to brush away all the doubts about him not being able to be fit around match date.

The return of Shakib is a huge relief for the team management as he will lead the spin attack of the hosts that is expected to be the deciding factor in the Test series but according to BCB’s chief selector Minhajul Abedin; it’s high time they need come out from spin-dependency.

Minhajul on Sunday insisted that they have picked five pace bowlers in their Test squad as they are eyeing to develop a pace unit to do well abroad.

Picking up five pace bowlers- Mustafizur Rahman, Taskin Ahmed, Abu Zayed, Ebadat Hossain and Hasan Mahmud- are nothing short of a surprise considering during the last Test match in Chattogram in 2018 where the hosts opted not to pick any pace bowler against Afghanistan.

Visitors were embarrassed by the Afghans and probably that prompted them to use two pace bowlers in their last Test match against Zimbabwe in 2019.

“We need to think about playing abroad and that is the sole reason we are trying to promote the pace bowlers,” Minhajul said.

“It’s not certain whether all the five selected pacers would be fit and sound throughout the series because keeping top-level stamina would be pretty hard in Test matches, that is why we have selected five of them,” he said.

“I hope they would maintain the same kind of fitness level in both the Tests,” he said adding that they have picked an 18-member squad considering the coronavirus pandemic.

“The 18-members squad has been selected considering so many factors, as in the desperate times of the COVID-19 pandemic, we need to be concerned about players getting sick, and the replacement has to be done immediately,” he said.

“We have selected players keeping the Test squad in consideration, as the players outside the selection pool also need to be groomed, working with the team management, and remain under a constant structure,” he said.

The hosts will play the first Test against the tourists at Chattogram (February 3-7) before returning to Dhaka for the second Test beginning on February 11.