Transgender people exult over getting homes 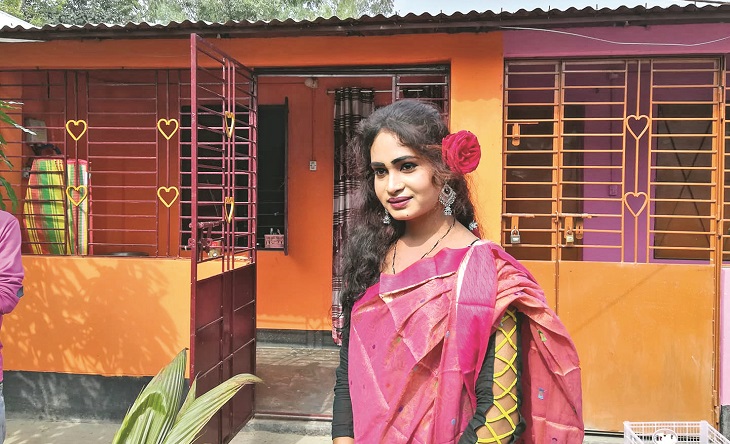 Transgender people have expressed joy and gratitude after getting homes as a gift from the government led by Prime Minister Sheikh Hasina.

Some 20 members of the transgender community, also known as Hijra, have received rooms at Hatikumrul in Sirajganj on Friday as part of the government’s initiative to rehabilitate the homeless and landless people during the Mujib Barsho, the birth centenary of Father of the Nation Bangabandhu Sheikh Mujibur Rahman.

This was part of the rehabilitation campaign for the vulnerable people under the Asrayan Prokolpo’s second phase under which 3,715 families were provided shelters in 743 barracks at 36 upazilas in 21 districts during the ‘Mujib Year’.

Despite their presence in thousands, the transgender people, known as “Hijra” in Bangladesh and in regions around, the community is largely rejected by their families.

They were also given cattle farms and sewing machines for improving their livelihoods.

The initiative --- ‘Ashrayan-2 project’ brought smile to the community, which has been deprived of a normal socioeconomic life.

The government estimates there are 11,000 hijras in Bangladesh but rights groups say the figure could be as high as half a million most of whom live in slum areas and subsist on odd jobs including sex trade.

“Besides giving them houses, the government has also given them cattle farms and sewing machines for improving their livelihoods,” he said, adding that the dairy firm produces 45 litres of milk every day.

While visiting the site, it was seen that a festive mood was prevailing in the area. The members of the community decorated their houses, planted trees, sewed vegetables on lands and were grazing their domestic animals.

They are socially barred from schools and in most cases turned down for work so many take to the streets and demand money from roadside shopkeepers and pedestrians, often using abusive language if refused alms.

Sources at the Social Welfare Ministry say that there are some homeless Hijras across the country will be rehabilitated in their respective areas in phases.

Ganga Khatun, who has got a room, said some 20 members of the community received shelter.

But some 50 members of the community will live there by sharing rooms, she said.

“We have got chickens, ducks, goat and 10 cows to generate income. We used to collect money from local shops and traders but now we are self-employed,” she said.

“People didn’t rent their houses to us. We have been abused by people, no one gave us work,” she added.

Porimoni, another transgender, told the Daily Sun that the house she has got will give her social recognition.

“My family wanted to get rid of me because they had to face a lot of unpleasant questions from neighbours and relatives,” said Porimoni.

She left her family 6 years ago. “Only my mother tried to support me but my brothers disowned her,” she recalled.

She is more than happy to get a piece of land with a room on her own. She wants to forget the past life with a hope of joy in the coming days.

Like Pori Moni many of these transgender children are banished from their families even before becoming teenagers to remain one of the most marginalised social groups though Bangladesh officially recognized them as a third gender in 2013 and provided them voting rights in 2019.

She urged other transgender people to come to lead a normal life responding to the premier’s initiatives and said they would help others to be integrated into the mainstream community by slowly diminishing the gaps and discriminatory attitudes.

According to the official apart from Hatikumrul project, the Prime Minister’s Office (PMO) has implemented another project for rehabilitating more 125 third gender families at Sadar upazila of Dinajpur district at Transgender Palli adjacent to Bangi Becha Bridge under the ‘Asrayan Prokalpa-2’.

As part of the noble initiative taken by Prime Minister Sheikh Hasina to rehabilitate all the homeless and destitute by the Mujib Barsho, some 69,904 destitute families across the country have received their permanent houses from the Prime Minister under the Ashrayan-2 project.

As part of the government’s commitment that every homeless will get home during the Mujib Barsho, the houses are being provided for the poor people.

The transgender people virtually received the premier’s direct personal blessings when a delegation of theirs met her on Sept 16, 2018 and joined a photo shooting session with her as well.