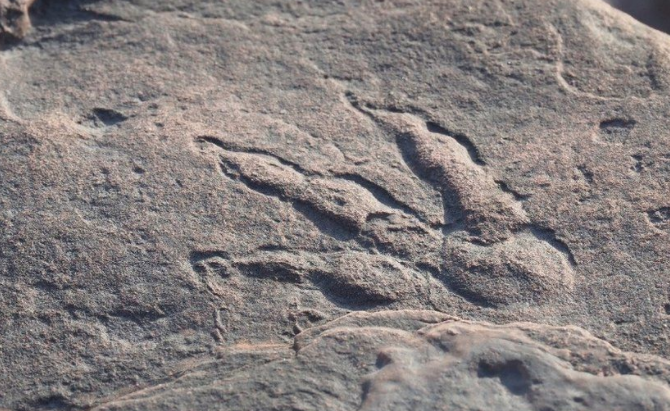 A well-preserved dinosaur footprint has been discovered by a four-year-old girl on a beach.

Lily Wilder spotted it at Bendricks Bay, Barry, in the Vale of Glamorgan - and scientists believe it could help establish how they walked.

The footprint, spotted in January, is 220 million years old and had been preserved in mud.

While it is impossible to tell what type left it, the print is 10cm long and likely from a 75cm tall dinosaur.

National Museum Wales palaeontology curator Cindy Howells described it as "the best specimen ever found on this beach".

"It was Lily and Richard (her father) who discovered the footprint," said mum Sally.

"Lily saw it when they were walking along and said 'daddy look'. When Richard came home and showed me the photograph, I thought it looked amazing.

"Richard thought it was too good to be true. I was put in touch with experts who took it from there."

The dinosaur which left it was described as "a slender animal" which would have walked on its two hind feet and actively hunted other small animals and insects.

Similar footprints in the USA are known to have been made by the dinosaur Coelophysis.

Specimens found at Bendricks Bay in the past are thought to be from more crocodilian-type reptiles rather than dinosaurs.

Special permission had to be sought from Natural Resources Wales to legally remove the footprint, with the fossil extracted this week and taken to National Museum Cardiff where it will be preserved.

Dinosaurs first appeared about 230 million years ago, with the footprint shedding light on an early point in their evolution, when the different groups of dinosaurs were first diversifying.

"Its spectacular preservation may help scientists establish more about the actual structure of their feet as the preservation is clear enough to show individual pads and even claw impressions," National Museum Wales said in a statement.

Why is the area important?

The Bendricks is a stretch of coastline between Barry and Sully in the Vale of Glamorgan.

It is an important palaeontologist site and a site of special scientific interest.

The south Wales group of the Geologists' Association called it "the best site in Britain for dinosaur tracks of the Triassic Period".

It said: "The footprints can be difficult to see. Many are covered at high tide so it is best to go after high tide when the tracks may retain small puddles of water.