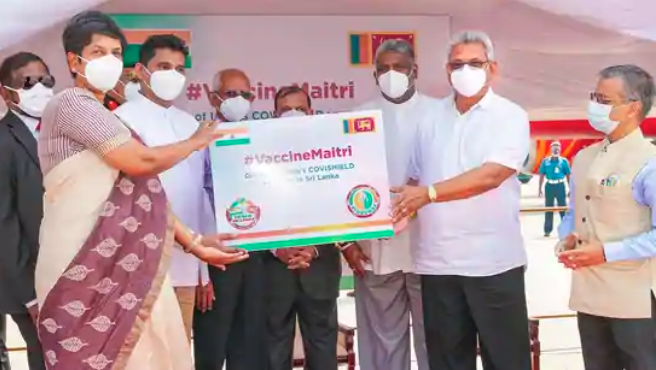 India rolled out 600,000 doses of Covid-19 vaccines as grant assistance for Sri Lanka and Bahrain under its “Vaccine Maitri” initiative on Thursday, a day after Nepal and Myanmar launched their inoculation drives with made-in-India doses.

Two separate flights transported 500,000 doses to Sri Lanka and 100,000 doses to Bahrain as part of India’s plans to gift the AstraZeneca vaccine to friendly countries in the neighbourhood and key partners in other regions.

The supplies to Bahrain marked the first such aid to a country in West Asia, which India sees as part of its extended neighbourhood. Bahrain is home to 350,000 Indians, the largest expatriate community, and New Delhi had facilitated the travel of Indian medical professionals to Manama last year to cope with the pandemic.

The arrival of Indian-made vaccines in Colombo coincided with the celebration of Poya Day, which marks the first visit of the Buddha to Sri Lanka. Indian high commissioner Gopal Baglay offered prayers at Gangaramaya Temple for the well-being of the people of Sri Lanka and handed over the vaccines to President Gotabaya Rajapaksa.

Rajapaksa said on Twitter: “Received 500,000 #COVID-19 vaccines provided by #peopleofindia at #BIA today (28). Thank you! PM Shri @narendramodi & #peopleofindia for the generosity shown towards #PeopleofSriLanka at this time in need.”

The delivery fulfilled Modi’s commitment to his Sri Lankan counterpart Mahinda Rajapaksa, made at their virtual summit last September, for all possible support to address the health and economic impacts of the pandemic.

“We will continue to supply vaccines to partner countries over the coming weeks and months in a phased manner. Decisions on these supplies will be calibrated against the requirements of the rollout of the Covid-19 vaccine at home,” he added.

On Wednesday, both Nepal and Myanmar launched their inoculation drives using made-in-India doses. Covishield, the AstraZeneca vaccine made by the Serum Institute of India, was Nepal’s preferred choice because of its compatibility with the country’s existing cold storage facilities.

Nepal plans to inoculate 430,000 people, including health and frontline workers, security personnel, senior citizens and prisoners, in the initial stages of its drive. It also intends to cover six million people in the first phase of the drive and is engaged in talks with India for commercial supplies of more vaccines.

Launching the vaccination drive, Nepal Prime Minister KP Sharma Oli said his government plans to immunise all eligible citizens in the next three months. Nepal will also receive millions of doses from Gavi or the Vaccine Alliance through the COVAX facility.

Myanmar has signed an agreement with Serum Institute to buy 30 million doses, in addition to the 1.5 million doses it received as a grant last week, as part of plans to inoculate the population of about 54 million. The first commercial supplies from India are expected in early February.

Authorities have said the initial stages of Myanmar’s drive will cover health workers, frontline service providers, government officials and lawmakers. Vaccinations for others will be rolled out from February 5, with first preference for people in most affected areas.

Observers and experts noted India’s timely rollout of millions of doses as assistance was in contrast to China’s aid to countries in the region, including those with which it has close ties, such as Pakistan and Myanmar. China has pledged to provide 500,000 doses to Pakistan by January 31. Also, Chinese foreign minister Wang Yi pledged 300,000 doses for Myanmar during a visit to the country on January 11 but supplies are yet to commence.