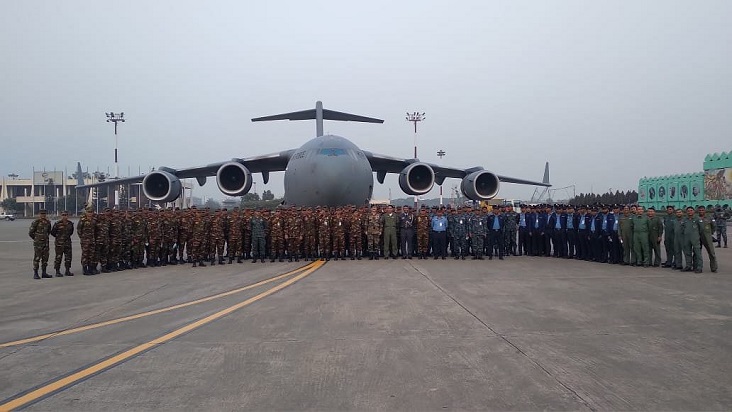 Bangladesh High Commission in New Delhi Muhammad Imran on Sunday accorded a reception to a 122-member tri-service contingent from Bangladesh which will participate in India’s Republic Day Parade in New Delhi on January 26, reports UNB.

Muhammad Imran spoke at the reception and described the participation of Bangladesh as demonstration of strong partnership and friendship between the two countries.

"It's a matter of pride," said the High Commissioner mentioning the importance of the year 2021 which sees celebrations of birth centenary of Father of the Nation Bangabandhu Sheikh Mujibur Rahman, 50 years of Bangladesh's Independence and 50 years of diplomatic relations between the two countries.

The contingent is being led by Col Md Mohtasim Haider Chowdhury.

A contingent of 122 proud soldiers of the Bangladesh Armed Forces, earlier reached India in a specially sent IAF C-17 aircraft.

This is only the third time in India’s history that any foreign military contingent has been invited to participate in this National Parade at Rajpath in Central Delhi.

It is especially significant as the year 2021 marks 50 years of the Liberation War, through which Bangladesh emerged as a vibrant nation, free from the yoke of tyranny and oppression, said the High Commissioner.

The Forces which fought and bled together 50 years ago will now proudly march down the Rajpath.

The Bangladesh contingent will carry forward the legacy of the brave freedom fighters who fought for freedom, justice and their people.

A majority of soldiers in Bangladesh contingent come from the most distinguished units of the Bangladesh Army, comprising of 1,2,3,4,8,9,10 & 11 East Bengal Regiments and 1,2 and 3 Field Artillery Regiments, who have the distinct honour of fighting and winning the 1971 Liberation War, according to Indian High Commission in Dhaka.

The Parade will be broadcast live, worldwide, on January 26.