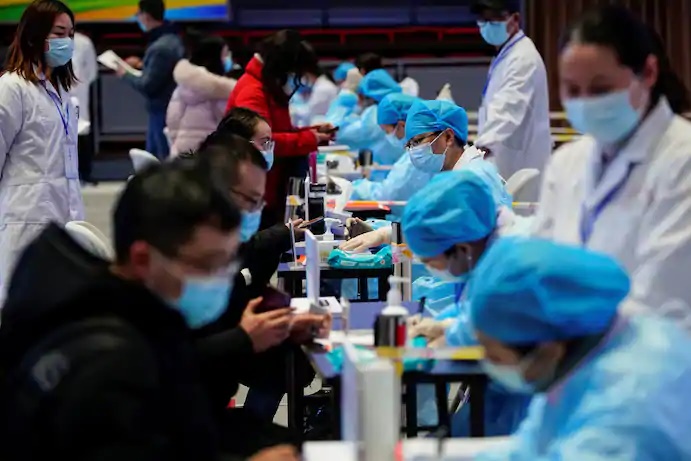 Europe and Australia should reject the "hasty" American vaccines linked to elderly deaths, Chinese scientists say. Western media refuses to investigate the dangers of the Pfizer-BioNTech shot, fumed a state television anchor. The coronavirus could be a plot involving former U.S. defense secretary Donald H. Rumsfeld, suggested a state media editor. And the real origin of the virus? Perhaps the U.S. Army's Fort Detrick should be investigated, intoned a Foreign Ministry spokeswoman.

One year after the coronavirus was first widely reported in China, the country’s state media and officials are again pitching a flood of theories about its origins (not China) and which vaccines are safe (not American).

The reports, claims by officials and unchecked online speculation this month appear to be part of a renewed Chinese push to cast blame for the pandemic elsewhere and undermine public confidence in Western vaccines.

International researchers say some Chinese theories, such as cold-chain packaging carrying the virus to China, could be possible, if unlikely. And most experts say that the side effects of new vaccines — and the definitive story of how and where the pandemic emerged — indeed require further investigation.

But China’s aggressive promotion of its narratives is muddying the waters precisely when a World Health Organization team in Wuhan is seeking to investigate the virus’s origins. The drumbeat of Chinese skepticism toward Western vaccines — one a joint production between U.S. pharmaceutical giant Pfizer and German biotech firm BioNTech, another from U.S. biotech company Moderna — ramped up in recent weeks as clinical data showed vaccines from Chinese pharmaceutical firms potentially lagging U.S. rivals.

“This defensiveness is all certainly against the background of the WHO investigation and a return of China to the media spotlight,” said Yanzhong Huang, a senior fellow for global health at the Council on Foreign Relations.

After Chinese officials and researchers spent months telling the public that China’s vaccines would win the global development race, Huang added, “there’s now a gap between expectation and reality that needed to be addressed, so you see this effort to disparage Western vaccines.”

Since early in the pandemic, Chinese leader Xi Jinping has avoided discussion of China’s role in the contagion and cast China as a world leader that would help others — particularly developing nations — recover. In speeches, including at the World Health Assembly, Xi has pledged that China would promote global vaccine cooperation.

In state media, the tone has been decidedly less lofty.

After one of China’s leading vaccine contenders, CoronaVac from Beijing-based Sinovac, made headlines last week after Brazilian researchers reported new findings that its efficacy reached only about 50 percent, several state media personalities questioned why the side effects and dangers of Pfizer-BioNTech’s vaccine were not also scrutinized.

The nationalist Global Times newspaper ran stories that seized on the deaths of 23 elderly -Norwegians who had taken the ¬Pfizer-BioNTech vaccine, and quoted Chinese experts who urged countries from Norway to Australia to halt its use.

Hu Xijin, the Global Times editor, wrote this week that the Western media was “out to destroy” the reputation of Chinese vaccines and that China needed to fight back. Days later, state outlets published photos of leaders, including Indonesia’s Joko Widodo and Dubai’s Sheikh Mohammed bin Rashid al-Maktoum, receiving Chinese vaccines.

In many ways, the Chinese rhetoric mirrors that of state media in Russia, which has touted its homegrown vaccine. Sputnik V, like the Chinese offerings, is traditionally developed with inactivated dead viruses, unlike the messenger-RNA vaccines made by Pfizer-BioNTech and Moderna.

For months, Russian officials such as Kirill Dmitriev, head of the Russian Direct sovereign wealth fund, have suggested that mRNA-based vaccines could damage fertility. Russian state media has bemoaned how Pfizer-BioNTech’s shot has been “imposed on literally everyone.”

The U.S. Centers for Disease Control and Prevention says studies on mRNA vaccine side effects are ongoing, but experts do not believe they pose a specific risk to recipients who are pregnant. Clinical trials suggest side effects of the Pfizer-BioNTech vaccine include fevers, chills, tiredness and headache in about 9 percent of recipients. About 0.6 percent reported severe adverse events, results show.

Concerns about mRNA vaccines have sometimes been voiced by the West, but in China, they have been a running theme. As U.S. firms have released early results in recent months, warnings from prominent Chinese experts have grown to a degree that has surprised observers.

George Gao, head of China’s Center for Disease Control and Prevention, recently pondered publicly whether the Pfizer-BioNTech and Moderna vaccines could cause cancer. Zhong Nanshan, who is considered a ¬national hero for his work on the SARS and covid-19 outbreaks and sometimes speaks on behalf of the government, dismissed ¬Pfizer-BioNTech’s and Moderna’s clinical trials as “very insufficient” in November. China’s vaccines, Zhong added, “are developed with rigor.”

Dali Yang, a political science professor at the University of Chicago who researches China’s health system, said that he was surprised a prominent health official like Gao would cast doubt on U.S. vaccines but that it was not clear whether such comments represented a concerted government strategy. Chinese factories, after all, have been contracted to produce millions of doses of ¬Pfizer-BioNTech’s vaccine, and it’s still possible that China could buy the vaccine to inoculate elderly citizens because the Chinese vaccines have not been tested on people over 59, he said.

“If they really played this up, they could make it very difficult for themselves,” Yang said.

The Chinese experts’ warnings have been mild compared with state and influential social media, where ominous reports and theories have gained traction.

The Chinese Internet lit up this month after Jin Canrong, a foreign policy adviser to the government, posted an essay by Xiong Lei, a senior state media editor, pointing out that Rumsfeld, through his shareholding as the former chairman of Gilead Sciences, has profited from Gilead selling antiviral drugs for outbreaks that have struck China.

“It’s not right that we ignore this,” Xiong wrote. “The United States is not without a record of biological warfare.”

On Tuesday, Foreign Ministry spokeswoman Hua Chunying pushed speculation about a U.S. Army biological warfare program. “If the United States truly respects facts, it should open the biological lab at Fort Detrick, give more transparency to issues like its 200-plus overseas bio labs, invite WHO experts to conduct origin-tracing in the United States, and respond to the -concerns from the international community,” she said in a briefing.

Some government agencies have appeared happy to stoke nationalism. Officials in Changzhou, in eastern China, claimed last month that a survey they conducted showed that 78 percent of respondents would prefer to take a Chinese vaccine. Just 7 percent said they would prefer a foreign one.

In the minority are those who have tried to lower the temperature.

Zhou Yebin, a senior researcher at Chicago-based AbbVie who has a large following in China as a science writer, urged Chinese to stop viewing the vaccine race as a “zero-sum game” and worrying whether the Chinese vaccines can compete with Western options. At a forum this week, the chief of Shanghai’s pandemic response, Zhang Wenhong, was asked whether Chinese should opt for a U.S. or Chinese vaccine.

Zhang dismissed the question and said he only wants to get 80 percent of the population inoculated. “It’s all good as long as you get it,” he said.

Jennifer Huang Bouey, a ¬Peking University-trained epidemiologist who is now a senior policy researcher at the Rand Corp. in Washington, said that in the past week she has anecdotally observed an uptick even in her WeChat circles — comprising highly educated Chinese researchers — of articles, including one on the British Medical Journal’s website, questioning the Pfizer-BioNTech vaccine’s efficacy.

Some Chinese researchers felt that Chinese vaccines were being unfairly criticized, Bouey said.

“So many people are watching China’s push to reach global standards, and it’s so high-stakes,” she said. “The pushback and generally the negative views from Western countries make them very insecure.”

Clarification: This story has been updated to more precisely describe the Pfizer-BioNTech clinical trial data published by the CDC. “Severe local and systemic adverse reactions” — including fevers, chills, fatigue, headache and muscle pain that interfered with daily activity — were reported in 8.8 percent of recipients. About 0.6 percent, a similar figure to that seen in placebo data, reported “serious adverse events” — untoward medical occurrences resulting in hospitalization, persistent incapacity, threat to life, prolonging of existing hospitalization, or death. These encompassed medical events occurring at a frequency similar to that within the general population.

Isabelle Khurshudyan in Moscow contributed to this report.