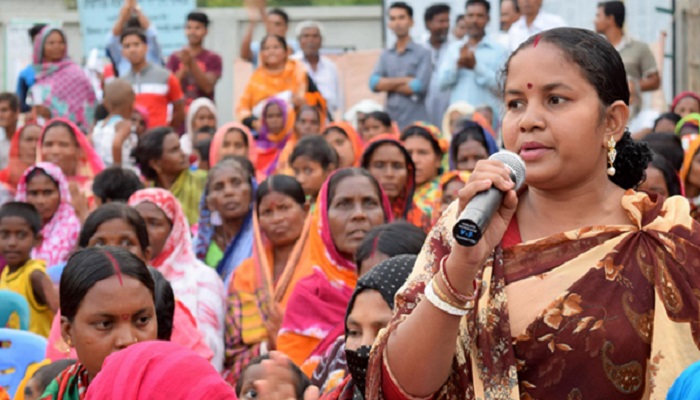 *Bangladesh waits for a golden moment

*Prime Minister Hasina and other global leaders are set to join

*It is Bangladeshi peoples’ time to have a VOTE for it!

Bangladesh is waiting for a golden moment on 25th January 2021. This moment of our pride might click on the global event ‘Climate Action Summit 2021’ hosted by the Netherland, convening global leaders and local stakeholders from all around the world.

Honorable Prime Minister of Government of Bangladesh Sheikh Hasina with other global leaders will join the event.

The world will get a comprehensive Adaptation Action Agenda that sets out clear commitments to deliver new endeavors and partnerships to make the world more resilient to the effects of climate change.

Mother’s Parliament (MP) from south-west coastal areas in Bangladesh has been in the finalists and waiting for your support.  It has gone through several stages of judging for more than seven months. It is Bangladeshi peoples’ time to have a VOTE for them!

You just need to click here, go the section ‘Mother’s Parliament advocates for climate resilient WASH facilities’  and scroll down that, then you will fine LOVE sign, just click on that. It’s done!

‘Mother’s Parliament advocates for climate resilient WASH facilities’ was one of the 350 applicants from different corner of the globe during June 2020. Then, a jury board including expertise on water has screened and shortlisted 139 change makers as eligible, and Bangladesh was there. In the second round, it also won to be one of the 78 inspiring semi-finalists in September 2020. At the end, as per assessment from the jury board, it has been in the honour’s board of 12 finalists declared in October 2020. Now, the final moment. And, it is waiting for your vote to be the champion in People’s Choice Award.

To raise awareness of the communities and create a space for their concerns to be discussed and resolved, 130 Health Village Groups (HVG) each consisting of 25 members work at village level. They formed an apex body called Mothers Parliament (MP), who discusses WASH related concerns of communities with Local Government institutions to advocate and solve issues raised by water users.

The MPs successfully advocate for affordable WASH technology that deals with increased salinity and flooding in their communities due to Climate Change, such as Pond Sand Filter systems.

In the 2018-19 fiscal year, the MPs achieved an increased budget allocation of 125%, to a total of USD 64,422/UP for WASH at local level. In Morrelganj, they managed to find additional sources of funding; here investment increased by 212%.

As one of the finalists, they will be called in the Conference of Parties (COP) 26 in Glasgow, the UK in November 2021 to share their journey to develop a climate resilient community.