In defense of George RR Martin 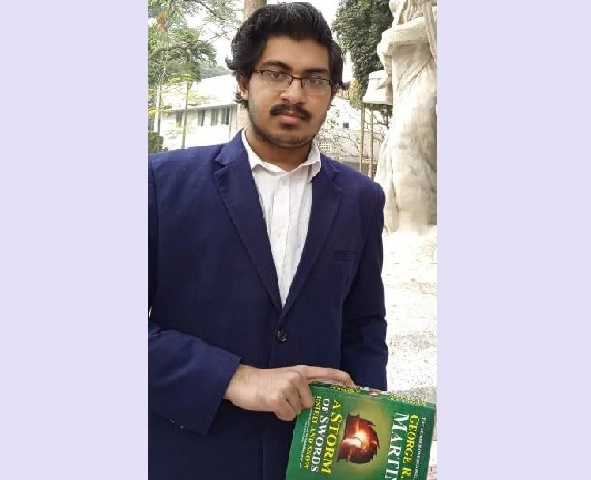 In 2001 Hugo Awards, George RR Martin (also known as GRRM) ‘ranted’ against JK Rowling, on her winning ‘his Hugo’.  Now, to begin with, the Hugo Awards is an annual literary award for the best science fiction or fantasy works and achievements of the previous year, given at the World Science Fiction Convention and chosen by its members.

Martin himself had always wanted to win one of those, especially of the category in `Hugo Award for Best Novel’. Martin had actually started to write from the late sixties and his first short story ‘The Hero’ was published in the Galaxy Magazine in 1971. This-perhaps-was the turning point for him as a beginner to pursue for a writing career. ‘The Hero’ had gained a relative amount of attention and anyone in his stead would be thinking like “Wow, I have procured the magic stick finally”. In truth, however, he hadn’t.  In fact, was far from it. The thing which many quite do not know is the fact that this young comic-nerd was writing to earn for a living, as many in that age do. Hitherto, the line “Hard work brings success” would not be an overstatement to define his first breakthrough book “A song for Lya”, published in 1974. And with that followed his first Hugo ‘victory’ in 1975 (It was of the category ‘Best Novella’). Dying of the Light was his first science-fiction novel and had gained widespread critical acclaim, yet-surprisingly-didn’t fulfill his heart’s desire. Yes, the Hugo remained out of hands. Now, there are many who claim that writers should not think about winning awards while preparing their crafts. Yet why is it that the craftsman smiles when his prepared item sells beyond his expectations? Because it is only then he realizes that his craft is really worth something, that now he really understands the buyers truly love what he made. That he comprehends his work was worth something and his efforts had not gone astray. He now really starts to believe in himself and the inner trust grows stronger than ever that finally a road has opened for him to make a living. Passion perpetuates only when professional road progresses smoothly. If not, passion ceases to exist. Love this comment or hate it, this is a reality of the modern world and survival can only happen by accepting the reality first and foremost.

We now know Martin as the creator of ‘A Song of Ice and Fire’ which was later adapted into the television series ‘Game of Thrones’. The show, despite all its flaws, had gained MASSIVE popularity all over the world and yes, you better believe that the block letters I used would hardly even be a nanometer in describing the extent of its craze in fans globally. I doubt even Martin himself would imagine this likely to happen one day. But his success had initiated all those years back ago when technology had not even fully flourished, movies were still shown in black-and-white screen, many of our parents were still young or infants and we-the present generation-had not even been born. And it was in the seventies that Martin gained further respect from people all over the world by expressing his opinions strongly against the Vietnam War. And it would be an understatement to say that it took courage to quote this in a country that has an overall craze for violence. Yes, that is America. In spite of that, it must be admitted that there were several other rational authors (or, different thinkers as I call them) who expressed their views against this madness. This was encouraging because most (if not all) of these authors were white individuals. Yes, Americans had raised their voice during the early days of this war but they were mostly people of color. Therefore, coming that from white Americans was really unprecedented. Perhaps because this was the first time whites and blacks were agreeing on something in common. Martin himself being a white American had gained the respect of many, albeit prompting hate on him from white extremists at the same time. Unfortunately, this did not prevent the war from happening and thousands of lives from both sides were lost.

Sufferings have been a real theme in Martin’s writing.  Often many of those have been of the common folk. So far, Martin has written five ASOIAF epic novels and the story is set up in the fictional world of Westeros. The author heavily relied on the medieval set up for this which helped to make it quite intriguing for the readers. War, sex, violence, betrayal, greed, religious beliefs, political conflicts and corruptions have always mopped up the pages which-truth be told-often does not make for easy reading. Of course there is fantasy in them (else why they fall in that category?) but many a time it seems the writer tends to put the above said elements in his writings to a far greater extent than the element of fantasy. And maybe-just maybe- these works get as close as possible to the real life. Which truly is quite unique for fantasy writers of all generation. His true genius can well be felt in intertwining these elements so that it feels fantasy and real simultaneously.  JRR Tolkien (author of the The Lord Of The Rings trilogy) was surely a master craftsman in his own way but in that sense, Martin can well be defined as an architect. One more curious thing is that there is a common trend in his way of writing, tracing back all those years back in the seventies. For instance, often we see him building up a story for a peasant fellow and romance, of course, exists in many of them. Psychological perceptions are also major illustrations in his writings that tend to give the reader a close feeling of how the narration is flowing. Just like a stream.  Oh, and then there is the killing up of protagonists in so many of them. Come on now, George, who wants to witness villains win frequently and their favorite characters in the hot seat? “All men must die, I think it’s part of life and art needs to reflect life,” said Martin. And the bitter truth is that life is not a bed of roses.

Nevertheless, Martin’s writings are not flawless. Crude words and plot holes exist in so many spots which are not difficult to trace if read carefully. Many, however, have argued that this can be a forgivable error when a complex storyline is created in a different fictional world. Whether this is a valid argument remains debatable. But one thing is certain---it does take an arduous effort to build up a world. Of course Martin deserves all the applause he is getting for the works he’s been putting on but the criticisms do have valid points about them as well. In the end, I suppose praise and hate are two sides of the same coin that a writer must have the courage to bear with him. May be that is why Martin got a bit vexed with Rowling back in 2001 for winning the Hugo award; that all the effort he gave in producing A Storm Of Swords (which frankly is a masterpiece in fantasy literature and lost to Rowling’s Goblet of Fire) seemingly ended in nothing.

Another thing which vexes me personally about Martin is his lengthy period in finishing up a book. Often he takes 6-7 years for completing a certain volume and currently, there are two more books to be published in the Song of Ice and Fire series! The Winds of Winter and A Dream of Spring are still in the writing process and it is unsure of when these two are finally going to be released. In the past months, however, Martin has tweeted quite a number of times that he is heavily working upon the books and the 6th book is more likely to be released later this year. Let us hope so. Until then, though, as Martin himself has put it out “everybody will be shivering together once again”…..