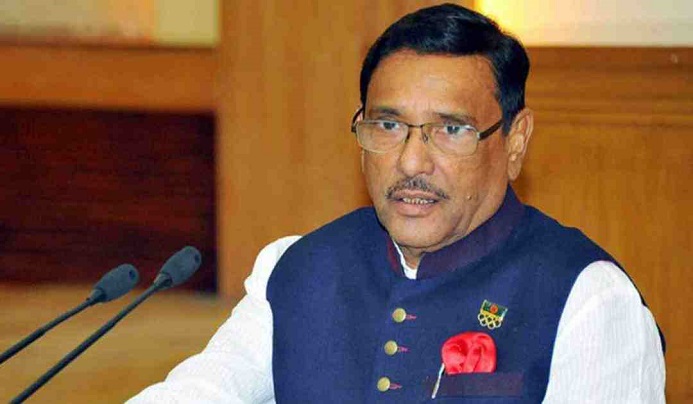 “Law enforcement agencies should take strict measures to avert any conflicts and chaos in the next phase of municipality polls,” he said.

Quader, also the Awami League general secretary, said this while addressing the inaugural session of a four-day workshop on fire safety joining it virtually from his official residence on parliament premises in the capital.

The minister came up with the directives following death of a councilor-elect in post polls clash in Sirajganj and sporadic violence in different municipal areas in the country.

Expressing sorrow at the death of the councilor-elect, Quader said those, who are involved with the incident, will be brought to justice and no mercy will be shown to the culprits involved in the crime.

Mentioning that party candidates clinched sweeping victories as the people want the country’s development and progress, Quader said, “The second phase of municipality polls witnessed massive voter turnout as Prime Minister Sheikh Hasina-led government has been maintaining the trend of development in all sectors.”

He said Bangladesh Nationalist Party (BNP) candidates also gained victory at the municipalities where they have popularity and carried out poll campaign.

“Even two rebels of BNP also clinched victory. Now BNP is finding no flaws and claiming that the vote margin was bigger,” he said.

It is natural that the AL candidates won the polls in huge margin because of the government’s unprecedented developments and achievements but BNP has no positive things to seek votes from the people, he added.

Those, who carried out arson attacks to kill people and made the country world champions in corruption, have nothing to say to the people for seeking votes, Quader said.

Mentioning that BNP has lost voters’ confidence as they didn’t conduct campaign and go to polling centers, he said that BNP should take lesson from the polls.

Turning to fire safety, he urged the government officials to keep in mind that protecting the lives and properties of others should be the prime target during any disasters including cyclone and flood.