A Bunch of Poems 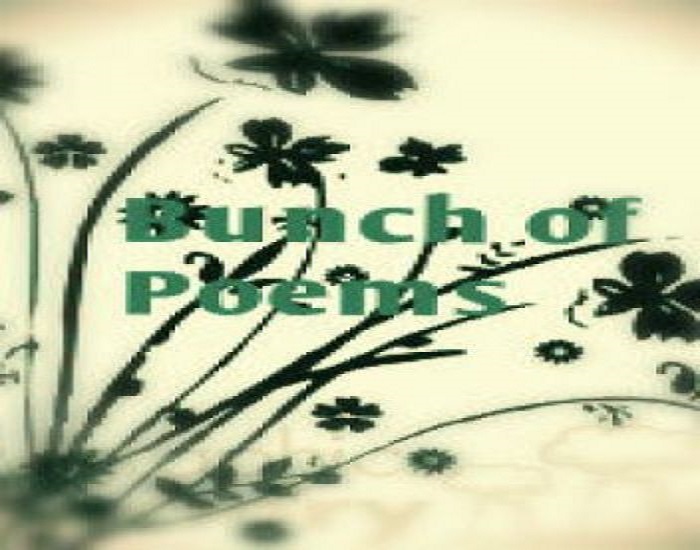 A Bunch of Poems

All my past shadows have been stored here in this room,

Childhood stories let the visitors in,

A box at the corner, unused clothing, silver ornaments,

And a grace that never goes out of style,

Beneath those glistening eyes, there are pools,

The low notes of the evening songs

Played with violin, rest quietly on the dust and dirt

Of the window sill,

The blurred black and white photos on the wall

Reminisce dew laden morning and tweets of the tiny birds,

Long, slim, little boats are as if floating haystacks

Moored on the water, overlooking the crumbling patio,

There is no tedium in the shallows of the river.

Still curious are the pigeons on the iron railings

Not a word they use in despair, in hidden tears.

From here we see them,

the cluster of faces tuck at the corner of the pavement

their hunger is repressed, their eyes dream

an imaginary ship sailing them under blue sky

the tea stalls give warmth.

The trees record the daily footfalls

We the ones from here on the balcony

not there or across the road, only here

smudge all the colours of the morning

the collage of the brown hands, pigeons and the flute man.

The blurred figures whisper to the wind

the lamp posts scream and flutter

near the canal bridge

all prayers are shade-less, cast out from the hell,

people come out from the factories

their stories look out to the wire, to burning echoes.

I walk in the cold desert for old time’s sake

to those ice-path and collect snow- flakes

against the tight fist of the silent graves.

The evening light spills across the base camp

and the memories scrawl words on the diary,

I only cry when the penguins drop their salutes

the ones stranded on the melting ice,

and then there is the air’s stillness into which

the seabirds change circuits as the days glow

lost in the elastic expanses of time,

a thread of softness runs through as well.

Shadows huddle around the electric heater

and lie under the thick blankets in silence

waiting for the weary eyes to be ready for dream.

Gopal Lahiri was born and grew up in Kolkata, India. He is a bilingual poet, writer, editor, critic and translator and widely published in Bengali and English language. He has had nine volume of poems in English and eight volumes of poems in Bengali and jointly edited three anthologies of poems. His edited volumes include ‘Selected Songs- Rabindranath Tagore’, ‘Bridging Continents’- Indo-American Anthology of poems and Jaillianwala Bagh- Poetic Tributes’.

Settled in New Delhi, he has attended various poetry festivals in India and abroad. He is published in 12 countries and in 12 languages. He is the recipient of the Poet of the Year Award in Destiny Poets, UK, 2016, Setu Excellence Award, 2020, Pittsburgh, US and Indology Life-Time Achievement award, 2020 West Bengal, India.