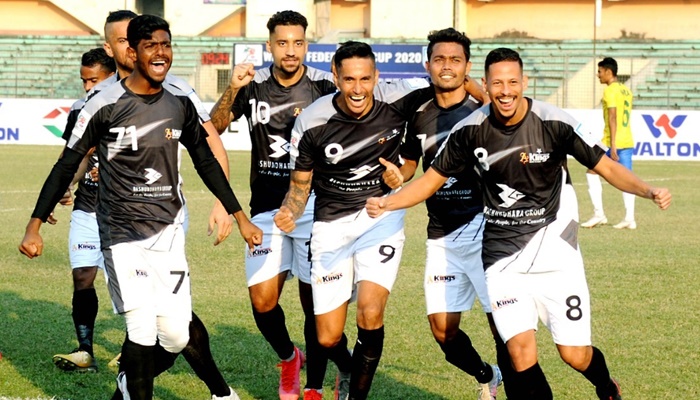 Defending champions Bashundhara Kings qualified for the final of the ongoing Walton Federation Cup after crushing Dhaka Abahani Limited by 3-1 goals in an exciting second semifinal at the Bangabandhu National Stadium on Thursday.

Kings will now play for their title-defense against Saif Sporting Club on December 10 at the same venue.

“At the burning moment the game was on our side. The game was absolutely open for 120 minutes and we hold it very well. The second goal was easy for us. We were better than them (Dhaka Abahani) in the match. But they gave a very good fight to us. They were very strong,” Kings Spanish coach Oscar Bruzon said after the match.

Kings conceded the first goal in the contest after Abahani’s Brazilian striker Francisco Torres netted the ball with a right-footer, off an eye-catching pass from Belfort in the 31st minute (1-0).

Kings fought back strongly in the second half and put pressure on Abahani’s defense and finally equalized when Brazilian midfielder Jonathan Fernandes put the ball home with a close range chip-in shot inside the box (1-1).

The stipulated 90 minutes of the match ended at 1-1 and went to the additional time. In the 110th minute, Kings forward Raul doubled the margin with a right-footer utilizing a short pass from substitute midfielder Matin Miah (1-2).

In the 111th minute, Abahani captain Nabib Newaz Ziban netted the equalizer from inside the box but referee Sujit Chandan canceled the goal due to offside. The match was paused for 10 minutes as Abahani players got involved in a dispute with the referee.

Just a few seconds before the final whistle, Fernandes netted the third goal for Kings, off a shot pass from Brazilian forward Robson in the 121st minute (1-3).

“We missed three to four open chances in the first 20 minutes and Abahani got the success from counter attacks from the left side. And in the last 15 minutes of the first half our team took control back in the game,” said Bruzon.

Argentine-born Chilean forward Raul Oscar Becerra expressed his happiness for his contribution to his side in the game.

“I’ve scored in all matches. (I am) very happy to contribute for the team. Most important thing is we are in the final. Hopefully, I will score goal there. There are lot of similarities between Brazilians and Argentines. Today, we’ve played together and contributed for the team,” Oscar said.