No risk even if any more bombs remain underground: Experts 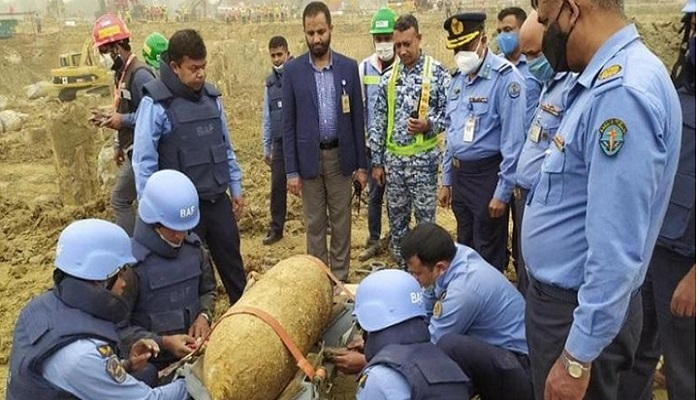 There is no risk of explosion even if any bomb, believed to be dropped during the country’s Liberation War in 1971, remains under the ground at the construction site of the third terminal of Hazrat Shahjalal International Airport (HSIA), experts said.

They said there is nothing to fear as such bomb does not explode unless it is hit hard.

The recovery of five huge bombs in a row raises questions in the minds of many people as what may happen if any bomb exists under the ground.

Talking to the Daily Sun, Security Analyst Maj Gen (Retd) AK Mohammad Ali Shikder said, “If these bombs are under the ground, the chance of explosion is very low. Because the nature of these bombs is that they do not explode unless they are hit hard.”

So, there is nothing to be worried about, he said. “We have bomb experts in our Armed Forces and they can take care of those bombs.”

On December 9, the first bomb weighing 250kg was recovered from the ground at the site of 3rd terminal of HSIA under construction. The construction workers first thought that it was an iron cylinder.

However, members of the Air Force Bomb Disposal Team identified it as a General Purpose (GP) Bomb dropped from the aircraft after testing. Four more bombs were recovered on December 14, 19, 28 and 30.

The last bomb, which was recovered on December 30, was found during the scanning of Air Force members.

Air Force Bangabandhu base bomb disposal unit took all the bombs to Rasulpur Firing Range in Paharkanchanpur with the necessary precaution and destroyed them.

AKM Maksudul Islam, project director of the third terminal construction, said, “We got the bomb without any accident. Then we became alert. Now members of the Air Force are screening the entire area.”

“We work there whenever they say a place is safe. As a result, there is no risk of an unintended accident,” he added.

However, bomb experts suspected that the bomb was dropped during the Liberation War of 1971.

Mohammad Ali Shikder said “In 1971, the Pakistanis Air Forces had a base at Kurmitola. Allied Indian forces planes attacked there by dropping bombs to damage the runway.”

“We think some of them might fell into soft soil and puddles and remained unexploded,” he added.

He said the bombs are General Purpose (GP) bombs, which explode when they are hit hard. So, after so many years, there is no danger of an explosion without a strong blow.

Ishfaq Ilahi Choudhury, a retired Air Commodore of Bangladesh Air Force, said,“I think the bombs have lost their effectiveness. Such old bombs are found in many parts of the world like England, Germany and French. They were not heard to explode on their own.”

He said such bombs are wrapped in thick steel. There is a system inside the bomb. When the bomb falls from an excessive height, the shock or impact is felt, the system is effective and the explosion occurs, he told the Daily Sun.

Such bombs create 20 to 30 feet deep wounds in the ground. The durability of the bomb is around one hundred years, said the retired air commodore.

He said, “If hit hard while piling, there is a risk of explosion. If it is not hit, it won’t explode. There is nothing to panic about even if any bomb stays under the ground without being caught.”

He said, “The bombs are rusty, even if they fall to the ground, there will be no problem. However, the screening work is going on keeping safety in mind. We want to get all the bombs out of the ground.”

He said screening machines can usually detect up to 10 feet deep. If there are any bombs deeper than this, they may not be caught in the machine.

“There is nothing to fear even if the bomb is deeper than this. We are also screening at different stages of the excavation so that no bomb is hit,” he added.