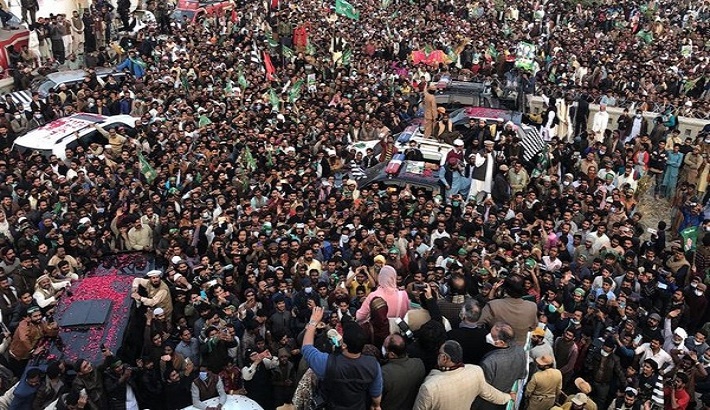 The leaders of Pakistan Democratic Movement, an 11-party alliance, kicked off a rally in Bahawalpur against the Pakistan Prime Minister Imran Khan government on Saturday.

Addressing party supporters there atop a container, Maryam asked them to follow her to Seraiki Chowk in the form of a procession.

“Come with your daughter, your sister Maryam, to Seraiki Chowk, so Bahawalpur may also announce the end of this fake government,” she said.

As the procession made its way to the rally venue, Maryam shared another video, saying Bahawalpur has “erupted”.

Workers of the Muslim League Youth Wing also staged a motorcycle rally in the city.

The rally will pass through Bandra Bridge, Model Town C Chowk, Fateh Chowk, Model Town B, and reach Toll Plaza Sutlej Bridge and it is expected that all three — Fazlur Rehman, Maryam Nawaz and Yousuf Raza Gilani — will address the rally at Chowk Seraiki.

The PDM, an alliance of 11 Opposition parties, has been formed against the army’s interference in politics and installing “puppet” Khan through a manipulated election.

Khan faces a serious challenge as the PDM set a January 31 deadline for him to step down or face a “Long March” to Islamabad.

The PDM has held massive rallies in major cities to seek Khan’s ouster and press the powerful military to stop interfering in politics. (ANI)