A story of overcoming disability 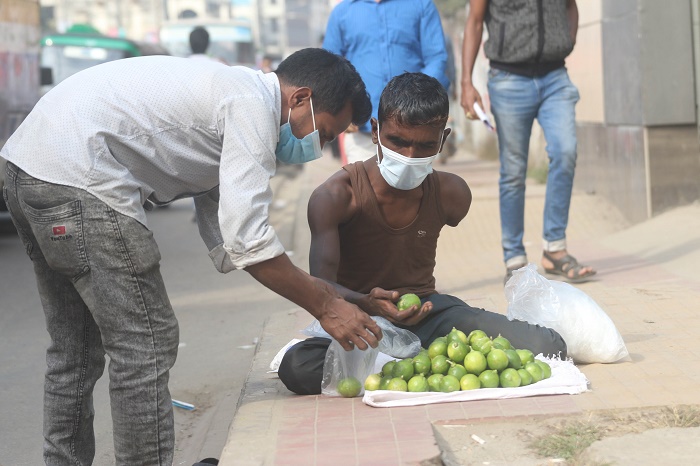 Maimed Mostofa sells lemons on a footpath in the capital’s Farmgate area to maintain his livelihood. He has started selling different products after he lost his left hand in an accident at the age of 12. The photo was shot on Sunday- Md Nasir Uddin.

Like all other children of his age, Mostafa wanted to go to school and study but he had to start working as an electrician to assist his family financially.

Back then, he was too small to bear the burden. Pursuing a risky profession, he became the victim of a fatal accident and lost his left hand. He was only 12 when he met the accident.

Since then, the world around him changed forever. When Mostafa was 25, his father died, leaving three sons and three daughters.

Being the eldest son of his parents, Mostafa had to take all responsibilities of his family.

Life offered tough challenges to him and every time he accepted them with courage.

He tried his hand at several businesses and sold various products before educational institutions, in bus stands and on footpaths.

While talking to the Daily Sun, Mostafa said, “Since losing my hand in the accident, scope for work dried up for me. It was difficult to find an employer who could recruit me to do a job. Therefore, I wanted to do something on my own initiative.”

“Things were really harsh. Failing to earn enough money, I and my family members had to pass days without or little foods at times. Yet I never lost my spirit,” he added.

Hard work always pays off. Today, Mostafa feels satisfied with his life. He may not have much wealth but he has married off two of his sisters. One of his younger brothers is working and another one is going to school.

Being overburdened with works, sometimes he feels weak physically but he overcomes that with his extraordinary mental strength and firm determination.

In a densely populated city where thousands of people have taken begging as their profession, being a physically challenged person he has never compromised his dignity.

Nothing can be more tragic than the combination of poverty and disability. And when it comes to a physically challenged person from a poor family background in Bangladesh, life becomes more complicated.

When asked that despite living in such a situation what motivated him to continue this long battle, Mostafa replied, “Being a disabled person it was really tough for me to survive in a society which is not supportive. But I tried. I never considered myself the type of person to always ask for help or live on someone’s pity. No matter what the situation is I have fortitude to fight back.”