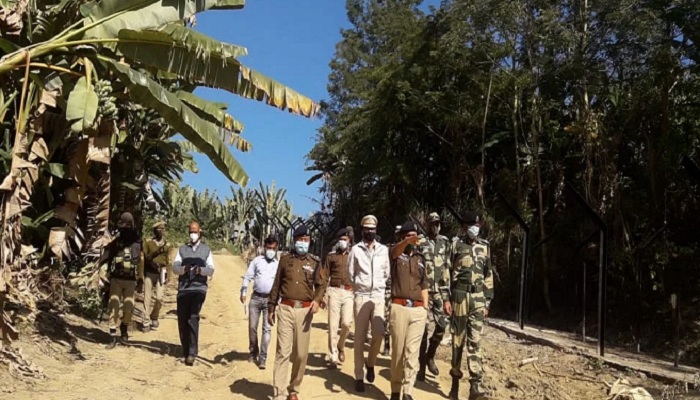 Three citizens of Tripura in India have returned to safety from captivity of banned separatist and terrorist outfit NLFT (Utpal) as a result of active role by Bangladesh security forces.

They were engaged in building barbed wire fences at the Bangladesh-India border at the moment of falling prey to abductors on December 7.

NLFT outfit kidnapped the three workers on gunpoint from the area between Malda Kumar Royajapara and Horiyamuni under Ganganagar police station of Dholai district.

After the incident, India had sought assistance of Bangladesh in rescuing the trio. Bangladesh responded positively and its security forces played vital role in this regard.

According to a report of Jagarantripura.com, the three Indian citizens are taken back to the country through the collaborative efforts by police of both countries. The rescue of the trio has intensified friendship between two next-door neighbours, the report added.

Immediately after the abduction, Tripura police and its armed forces jumped into search operation which was expedited and result oriented due to the active role of Bangladesh side.

Finally, the three workers were released by the terrorists on Friday, 16 days after the abduction.

They reached the BSF outpost at DP para area under Gondachora police station in Dholai at 6:30pm, the report said.

Sources said NPCC site supervisor Shubhash Bhoumik, JCB excavator driver Shubol Debnath and head of workers Gonopoti Tripura went to fetch water from a nearby area on December 7 when five terrorists of the banned terrorist outfit of NLFT (Utpal) swopped on them.

Their co-workers informed BSF members of the incident as the three did not return despite expiry of long time.

As part of rescue operation, police detained associates of terrorists Pathan Mohon Tripura, Jatindra Tripura and Boijoy Tripura. During interrogation, they delivered inconsistent statements and some clues. Finally, they were arrested.

Continuous search operations by the Tripura police put pressure on the terrorists leading to release of the abductees.

Collaborative effort of India and Bangladesh in the field of security is longstanding and a continuous issue.