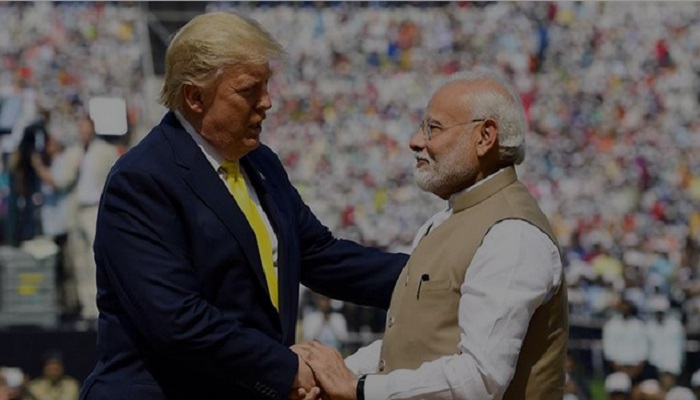 President Donald Trump has conferred the Legion of Merit, one of the highest military honours of the US, on Prime Minister Narendra Modi for his leadership in elevating bilateral strategic partnership and accelerating emergence of India as a global power.

Prime Minister Modi thanked President Trump for the honour, saying the award recognises efforts of people of India and US to improve ties.

'I am deeply honoured to be awarded the Legion of Merit by @POTUS @realDonaldTrump. It recognises the efforts of the people of India & the US to improve bilateral ties, reflected in the bipartisan consensus in both countries about the Indo-US Strategic Partnership,' Modi tweeted on Tuesday.

He said the 21st century presents both unprecedented challenges as well as opportunities. 'The India-US relationship can leverage the vast potential of our people's unique strengths to provide global leadership for the benefit of entire humanity,' Modi said in another tweet.

'On behalf of the 1.3 billion people of India, I reiterate my government's firm conviction and commitment to continue working with the US government, and all other stakeholders in both countries, for further strengthening India-US ties,' Prime Minister Modi added.

India's Ambassador to the US, Taranjit Singh Sandhu, accepted the award on behalf of the prime minister from the US National Security Advisor Robert O'Brien at the White House on Monday.

President Trump 'presented the Legion of Merit to Indian Prime Minister Narendra Modi for his leadership in elevating the US-India strategic partnership,' O’Brien said in a tweet.

Modi was presented with the highest degree Chief Commander of the Legion of Merit which is given only to the Heads of State or Government.

He was given the award in recognition of his steadfast leadership and vision that has accelerated India's emergence as a global power and elevated the strategic partnership between the United States and India to address global challenges.

In New Delhi, the Ministry of External Affairs said the award is in recognition of Prime Minister Modi's steadfast leadership and vision for India's emergence as a global power.

'The award is in recognition of the Prime Minister’s steadfast leadership and vision for India's emergence as a global power, and exemplary contribution made by him for the advancement of the India-United States strategic partnership and promoting global peace and prosperity,' it said in a statement.

Senior BJP leaders asserted that the US' decision to confer the prestigious award on Prime Minister Modi reflects his 'acceptance' as a world leader and is a testimony to his vision, steadfast leadership and diplomacy.

Congratulating Modi, Home Minister Amit Shah said that this award is yet another testimony of his acceptance as a world leader, working relentlessly towards global peace.

Defence Minister Rajnath Singh said this is a recognition of Modi's leadership and statesmanship by the global community.

O'Brien in another tweet said that Trump also presented the Legion of Merit to Australian Prime Minister Scott Morrison and Japan’s former prime minister Shinzo Abe. The awards were received by their respective ambassadors in Washington DC.

President Trump 'awarded the Legion of Merit to Japanese Prime Minister Shinzo Abe for his leadership and vision for a free and open Indo-Pacific,' he said.

The United States is the latest country to confer its highest award to the Indian prime minister.

Other awards include Order of Abdulaziz Al Saud by Saudi Arabia in 2016, State Order of Ghazi Amir Amanullah Khan (2016), Grand Collar of the State of Palestine Award (2018), Order of Zayed Award by the United Arab Emirates (2019), Order of St Andrew by Russia (2019), Order of the Distinguished Rule of Nishan Izzuddin by the Maldives (2019).