Armed forces to be given modern equipment: PM 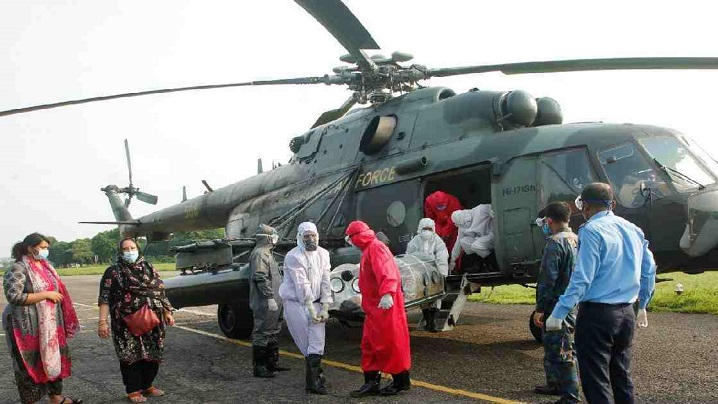 Prime Minister Sheikh Hasina on Sunday reaffirmed that the country's armed forces will be provided with more modern equipment and technologies as ensuring top quality modernised force is very important.

"We participate in UN peacekeeping missions where there’re army personnel from other countries, too…we’ve to keep pace with them," she said.

She said the government is doing whatever is needed to include new technologies in the armed forces so that Bangladesh is not left behind. "We’ve to build up ourselves like that way."

To improve the ability of Air Force, she said, the government has completed the agreement process to procure five ultramodern C-130J transport planes and three of those are already arrived in the country.

She also said seven more most modern K-8W jet trainer planes have been inducted to the Air Force fleet while PT-6 Simulator will be added very soon for ensuring advanced training for the pilots.

"A process is underway to procure more modern and high-capacity warplanes and other equipment to modernize the Air Force further and implement the Forces Goal-2030," she said.

But, the PM said, the government could not spend the desired money due to the coronavirus pandemic but “we’ve a plan to make the Air Force more time-befitting one.”

The government has recently started the Bangabandhu Sheikh Mujibur Rahman Aviation and Aerospace University in Lalmonirhat which will offer courses on flying planes, building aircraft and space science.

"We hope one day we’ll be able to build war planes, transport planes and helicopters, Inshallah. We’ll also be able to do our space research and go to the space. We’ll continue our efforts to that end," Hasina said.

Hasina asked the fresh cadets commissioned to Bangladesh Air Force to develop themselves as competent members of the force to cope with the world’s modern forces utilizing their training skills.

Terming today’s flying officers the soldiers of 2041, she said, they will be the leaders to materialise the dreams of the Father of the Nation and build a developed Bangladesh in the days ahead.

Earlier, the Prime Minister took salute at the parade and witnessed a short but impressive flying past by the Bangladesh Air Force.

At the function, Air Chief Marshal Masihuzzaman Serniabat, on behalf of the Prime Minister, handed over sword, awards and other trophies among the winners who successfully completed the 77th Buffer Course at the Air Force Academy.