Dhaka won the toss and opted to bat first, but they failed to post a challenging total, scoring 116 runs in 20 overs. 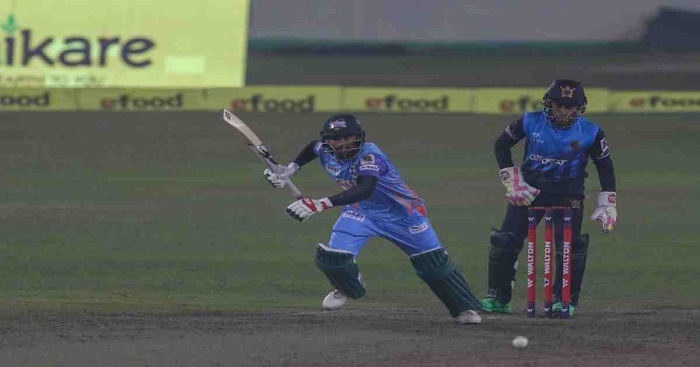 Gazi Group Chattogram, the table-topper in the league-phase of the Bangabandhu T20 Cup, advanced to the final winning a low-scoring affair against Bexmimco Dhaka by seven wickets on Tuesday at Sher-e-Bangla National Cricket Stadium.

Dhaka won the toss and opted to bat first, but they failed to post a challenging total, scoring 116 runs in 20 overs.

Dhaka sent Sabbir Rahman and Muktar Ali as the openers aiming to display some explosive batting performance during the early overs, but the duo failed to do so.

Sabbir scored 11 off 11 and Muktar came up with seven of seven balls. It was a short-pitched delivery which Sabbir tried to clear through the mid-wicket region, but the fielder at the short-mid-wicket took an easy catch to remove him.

Dhaka never recovered from this lifeless batting performance as the posted only 56 runs for three wickets in 10 overs. They needed to accelerate in the last 10 overs to set a tough target for Chattogram, but they failed to do that.

In the last 10 overs, Dhaka added only 60 runs on the board losing the remaining seven wickets.

With these three wickets, Mustafizur'd tally reached 21, and he is now the only bowler of this event to take 20 or more wickets.

In reply to 116 runs, Chattogram ended on 117 for three in 19.1 overs. Liton Das and Soumya Sarkar added 44 in the first wicket stand. Soumya was run-out after scoring 27 off 23 balls with five fours.

His partner Liton posted 44 off 49 balls with four fours while Mohammad Mithun scored 34 off 35 balls with two fours and a six.

For Dhaka, Muktar Ali and Al Amin took one wicket each.

With this defeat, Dhaka ended the Bangabandhu T20 Cup as the third-best team.

Chattogram will now face Gemcon Khulna in the final of the event on December 18 at the Sher-e-Bangla National Cricket Staidum. The final will commence at 4:30pm (Bangladesh time).