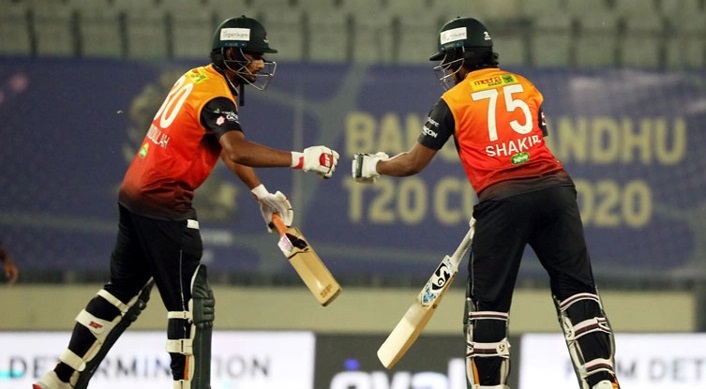 Opener Jahurul Islam struck his career-best 80 as Gemcon Khulna compiled a mammoth 210-7 against Gazi Group Chattogram in the first Qualifier game of the Bangabandhu T20 Cup at Sher-e-Bangla National Cricket Stadium on Monday.

Jahurul struck five fours and four sixes in a knock in which he played just 51 balls.

Around him, other Khulna batsmen came up with aggressive batting show to help the side post a daunting total.

After being sent to bat first, Khulna got off to a rapid start thanks to Jahurul who came hard on the Chattogram bowlers even though his fellow opener Zakir Hasan struggled to make impact.

Zakir was trapped run out for 16 off 22, bringing an end to the 71 runs partnership which came off just 55 balls.

Kayes then joined Jahurul and kept the pace as Khulna grew with strength to strength as the innings progressed.

When Mustafizur Rahman had Kayes caught by Mahmudul Hasan, he already struck 28 off 15, with two fours and as many sixes.

Jahurul meanwhile brought up his eight T20 fifty and looked set for a century. Mosaddek Hossain ended his beautiful knock but his dismissal paved a way for captain Mahmudullah Riyad to go on berserk.

But Shakib Al Hasan, who so far failed to make any impact in the tournament, stood tall in the big game. Shakib struck 28 off 15 with two fours and as many sixes but importantly he gave the side an impetus in the death overs, when someone needs to stick to help Khulna make good finish.

Mustafizur Rahman was the most successful bowler for Chattogram with 2-31 while Sanjit Saha and Mosaddek took one wicket apiece.