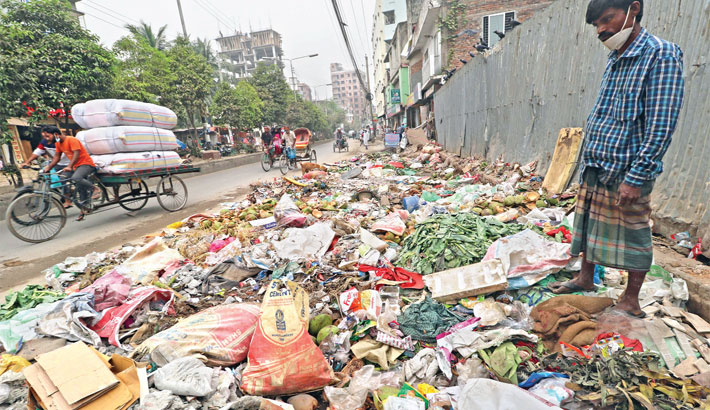 At least eight solid waste garbage transfer stations have been set up on the roadside in the city’s busy Kamal Sarani in Agargaon, creating serious traffic congestion and public health hazards.

Sufferings of the locals and pedestrians are getting worse due to dumping of waste in open places. Sources said the garbage is being collected and being put on those centres in broad daylight, which is a violation of a High Court Order.

In October 2017, the HC following a writ petition ordered the city corporations to stop transporting garbage by uncovered vehicles and asked them to collect and transport garbage between 10:00 pm and 6:00 am.

Locals said that waste-collecting vans of Dhaka North City Corporation (DNCC) dump several tonnes of wastes on the garbage transfer stations on the road, better known as 60 Feet Road, on the way to Amin Bazar Landfill throughout the day.

‘Waste collectors dump the waste here on road and then load those on garbage trucks to carry them for final dumping,’ said Aminul Haque, a businessman of the area.

Due to the waste loading and unloading on the road, traffic jam eats up at least half an hour in a single trip on Laguna, said a regular commuter.

He said three of the eight garbage transfer stations grabbed more than half of the road where DNCC trucks remain parked day long to carry the wastes. Regular commuters said that they face acute bad smell of the mixed wastes including kitchen, medical and electronics wastes.

The situation becomes more acute in the time of rain when the whole road litters with waste and waste-water of the leftover waste.

The waste collectors park their vans haphazardly most of the time on the road and ply on the wrong side of the road.

Ward councillors of the area said that many people complained to them repeatedly for public sufferings but they couldn’t solve the problems as yet.

They said that DNCC waste department asked them to manage land for making a Secondary Waste Transfer Station but they could not manage the land.

The 60 Feet Road is a busy road this time as it is used by many people as an alternative road of the Begum Rokeya Avenue on which Metrorail construction is going on.