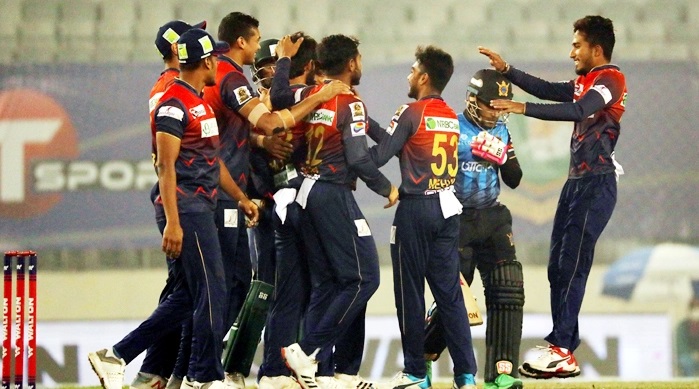 Fortune Barishal snatched a thrilling two-run victory over Beximco Dhaka, defying a stellar century of Naim Sheikh and in doing so, confirmed their playoffs in Bangabandhu T20 Cup.

Riding on three half-centuries from their three youngsters—Saif Hassan, Afif Hossain and Towhid Ridoy, Fortune Barishal compiled a hefty 193-3 in a match in which they needed a victory to seal last four spot.

Their bowlers helped them defend the total despite a terrific century from Dhaka opener Naim Sheikh who hammered 105 off 64, clattering eight fours and seven sixes at Sher-e-Bangla National Cricket Stadium on Saturday.

Dhaka was eventually restricted to 191-6 in the stipulated 20 overs.

Barishal’s victory also effectively ended Minister Group Rajshahi’s hope to play the playoffs. Despite a defeat against Gazi Group Chattogram in their last game, Rajshahi could seal the deal if Dhaka could overhaul the target of Barishal in 18.3 overs.

But Dhaka neither could help Rajshahi, nor did save them from being moved down to third position in the point table. It means Dhaka now has to play the eliminator game against Barishal on Monday. Whoever losses the Eliminator game will be eliminated straightway.

Table topper Gazi Group Chattogram will face off second placed Gemcon Khulna in the first Qualifier game. Whoever wins, will seal final straightway but the team who will loss will get another shot at the final as they would take the winner of the Eliminator Game.

Both the Eliminator and Qualifier game will be held on Monday.

However, Dhaka made a good start in pursuit of Barishal’s 193-3 with their openers Naim Sheikh and Sabbir Rahman sharing 52 runs for the opening stand in just six overs.

Suhrawardi Shuvo, playing his first match for Barishal, triggered a collapse that saw Dhaka lose three wickets for 10 runs including captain Mushfiqur Rahim to be left to 62-3.

As it looked, Barishal would make it cakewalk, Naim Sheikh and Yasir Ali Rabbi counterattacked in style to make Dhaka heavily favourite to win the game.

Naim Sheikh brought up his half-century off 43 balls after which he dismantled Barishal bowling in a gem of batting and thereby earned second fifty off just 17 deliveries.

Overall he took 60 balls to hit his maiden T20 century.

Pacer Sumon Khan brought Barishal back into the contention by getting rid of Naim Sheikh and it ended 110 runs partnership off just 59 balls between him and Yasir Ali.

Dhaka was still in the match with set Yasir Ali showing them the way. However he was trapped run out for 28 ball-41 in the last ball of the penultimate over, giving Barishal the edge.

The lower order batsman couldn’t score the required 17 runs in the last over and Barishal finally sealed the deal.

Earlie, Barishal responded terrifically after being sent to bat first.

Opener Saif Hassan paved the platform, hitting a 50 off 43, sending the ball across the rope for eight times.

Utilizing the platform set by Saif, Afif Hossain and Towhid Ridoy went berserk on the Dhaka bowlers to pile up 91 off 39 balls for the undefeated fourth wicket partnership to take Barishal in a zone which looked safe.

Captain Tamim Iqbal failed to deliver in the crucial game as he was dismissed for 19 off 17 but Saif kept the scoreboard ticking rapidly.

Shortly after the dismissal of Emon, Saif was also removed.

But there was no look back for Barishal after that as Afif and Ridoy came hard on the Dhaka bowlers to milk runs at will.

Thanks to their free flowing batting, Barishal amassed 78 runs in the last five overs, which means they took almost 16 runs per over in the last powerplay.

Both of the batsmen reached their respective half-century at the last over.

Afif Hossain finally remained not out on 50 off 25, hitting one four and five towering sixes while Towhid Ridoy was on 51 off 22, smashing two fours and four sixes.