'Magical' monolith appears on Isle of Wight beach in UK 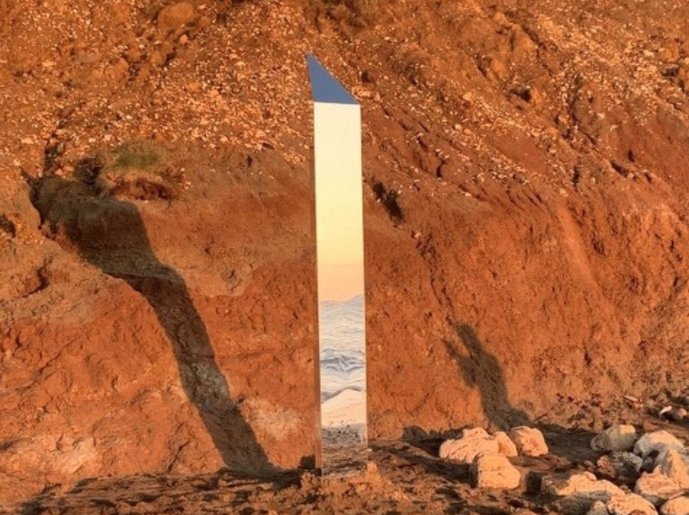 A monolith, similar to those found in the US and Romania in recent days, has mysteriously appeared in Britain.

The unusual mirrored structure was discovered on the Isle of Wight, an island off the south coast of England.

Resident Alexia Fishwick said she "was dumbstruck" when she came across it during a beach walk on Sunday and described it as "really quite magical".

Many observers have presumed they were art installations left by sculptors.

The metal edifice in Utah was found planted in the ground before it disappeared just days later.
Two other shining metal towers later appeared in Romania and southern California.

Ms Fishwick said: "I'd read about the one in Utah and then Romania, so I knew the significance. Many people took no notice of it."

She said people first thought she had photoshopped the images when she put them online.

Lee Peckham, a lawyer living on the island, said: "I saw it and wondered what it was and thought it a rather strange thing to see on the beach. I wondered who put it there and why."

An anonymous collective called The Most Famous Artist has taken credit for the monoliths in Utah and California.

However, when asked about the Isle of Wight structure, it said: "The monolith is out of my control at this point. Godspeed to all the aliens working hard around the globe to propagate the myth."

News of the monolith on the island has caused a stir on social media with some posting in jest - that the monolith - which already has its own Instagram page - could be a portal to another dimension.

In 2001: A Space Odyssey - the 1968 film directed by Stanley Kubrick - imposing black monoliths created by an unseen alien species appear in the movie, based on the writings of novelist Arthur C Clarke.