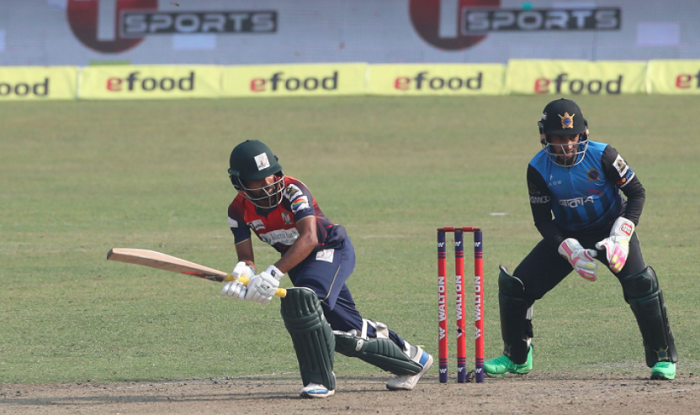 Dhaka, who had lost their first three matches, got off the mark in the tournament with a hard earned win as they took 19 overs to reach 109 runs for 3 wickets after Barishal posted a paltry total of 108 runs for 8 wickets.

Sent to bat, Barishal failed to gain any momentum in their innings, with Under-19 World Cup winning star Towhid Hridoy and skipper Tamim Iqbal hitting a run-a-ball 33 runs and 31 runs respectively while the rest of the batting line-up lent no support.

Robiul Islam, known as a top order batsman in the domestic circuit, caused the main damage with the ball for Barishal as he picked 4 wickets for 20 runs in his four overs of off-spin.

“After watching the wicket, I understood it is a bowling friendly wicket. So I just tried to bowl in good length and as I got some help, it helped me earn wicket as well. We are a good side but the first match went out of our grasp. We are hopeful to make a comeback after the first win,” said Robi.

Dhaka, despite limping at the start of the chase, held their nerves as Mushfiqur Rahim and Yasir Ali formed a partnership of 55 runs and took their team home.

From the last two overs, Dhaka needed 16 runs but Yasir did not allow the match to go into the final over, as he charged Taskin Ahmed and pulled him for two sixes to conclude the match in the penultimate over and earn his team’s first victory with six balls to spare.

“When you are chasing a small target you need to be tactful because the opponents have nothing to lose. They will be be aggressive throughout the 20 overs so you have to take calculated risk. We lost wickets early, so I was cautious. Because I knew if I can stay at one end, we can win the match provided someone scores 30 or 40 runs from the other end,” said Mushfiqur.

“If we could finish the match earlier, it would have been better because we are lagging behind in run rate but a win is a win nonetheless,” he said.

“The wicket was not dry due to a lack of sunlight and so we understood that it will not be easy to score quickly,” he concluded.