Construction of Bangabandhu Sculpture: Fanatics out to create unrest 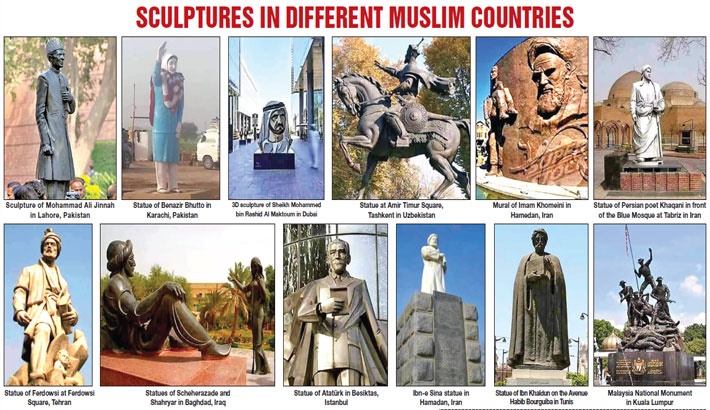 Fanatics and anti-liberation forces are trying to destabilise the country by sparking controversies over the government’s move to construct a sculpture of Bangabandhu Sheikh Mujibur Rahman.

An Islamist party leader has recently told a programme in Chattogram that if a sculpture of Bangabandhu at Dholaipar in the capital is set up, it will be dragged down, which has aroused widespread controversies across the country.

Political, social and cultural activists burst into protests against such an arrogant statement by fundamentalists.

Many said there are sculptures in different Muslim countries, including Indonesia, Saudi Arabia, Iran, Jordan and Pakistan, but no one talks about the sculptures there.

A sculpture is a symbol of a country’s history, tradition and bright memories and liberation war. Sculptures are found in almost every country in the world, they said.

A sculpture is not an idol. Worshiping an idol is a part of a religion. Construction of a sculpture cannot be a religious issue, they opined.

Progressive people have vented anger on Hefazat-e-Islam Bangladesh Ameer Junaid Babunagari’s statement that ‘if a sculpture of Bangabandhu is set up, it will be dragged down’.

Islamic experts said that sculptures can be placed for public interests. None should think that construction of a sculpture is a ‘haram-halal’ issue.

Dr Muhammad Shafiq Ahmad, professor of the Department of Islamic Studies at Dhaka University, told the Daily Sun, “There is no obligation in shariah to install a sculpture. This sculpture will be installed not for puja. It is a part of history, heritage and liberation war of the country.”

“We see sculptures in different Muslim countries of the world,” he said.

Over the move to install the sculpture, Awami League general secretary Obaidul Quader said a radical communal clique has made ill efforts to spread hatred among religious people by misinterpreting Islam.

Newly-inducted state minister for religious affairs Md Faridul Haque Khan on Sunday said there is a difference between a sculpture and an idol. Sculptures are found in almost all the countries in the world.

“A sculpture and an idol are not the same. Sculptures are found in almost all the countries of the world... Some are opposing construction of Bangabandhu’s sculpture out of ignorance,” he said.

He also said there are portraits on coins of many countries and similarly coins of Bangladesh have also Bangabandhu’s portrait.

Mukul Kumar Barai, associate professor of Department of Sculpture at Dhaka University, told the Daily Sun, “Sculpture is a part of the history, heritage and liberation war of the country. Sculptures are found in almost every country in the world.”

Communist Party of Bangladesh (CPB) leader Ruhin Hossain Prince said, “Sculptures are found in all countries of the world. Sculpture is not an immoral thing. Bangladesh is a non-communal country. In this country, anyone can make sculptures and idols. Controversies over Bangabandhu’s sculpture cannot be a moral issue.”

A group of people favouring the Bangabandhu sculpture issue blocked a road at Shahbagh in the capital on Saturday, demanding the arrest of those who are opposing the sculpture’s construction.

They left Shahbagh after announcing human chains and protest rallies across the country for today.

Expressing solidarity with the programme, former Justice AHM Shamsuddin Chowdhury Manik said, “Mamunul-Faizul group who is opposing construction of Bangabandhu’s sculpture should be given exemplary punishment. They’re the enemies of Islam and humanity.”

Bangladesh Chhatra League president Al Nahian Khan Joy said, “Hefazat-e-Islam leader Mamunul Haque is taking side of militancy. Those who are backing communalism and militancy must be resisted.”

“Alem and Olema are respectable persons. They are representing Islam. They are carriers of Islamic ideals. But there is no room for extremism in Islam,” he said.

Hanif said the sculpture of Father of the Nation Bangabandhu Sheikh Mujibur Rahman will be set up in the country. None can stop it.