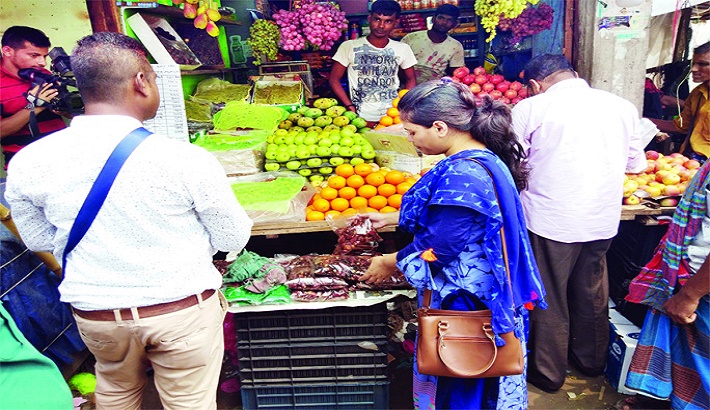 With the market being flooded with adulterated foodstuffs, it is the responsibility of the two city corporations of Dhaka to ensure food safety in the capital through regular inspections, but they seem to do little to this end, much to the concerns of the city dwellers.

The inspection of food items has seen a decrease in the capital over the last few years and the most worrying fact is that one of the city corporations did not send any sample for laboratory test for the last three years, according to data of the Modern Food Testing Laboratory and Training Centre.

But the food inspectors are now being engaged in other works, including drives being conducted by different agencies, indulging Rapid Action Battalion, against food adulteration and mosquitoes, and waste management inspection.  Asked, DNCC Deputy Chief Health Officer Md Golam Mostafa Sarwar said he was unaware of the matter. “I’ve asked my nine sanitary officers to explain the matter. I’ll take effective measures to ensure safe food for city dwellers.”

However, DSCC officials refused to make any comment over the issue. A decline in substandard food items

The number of substandard food items has also seen a fall in the capital over the years, according to the rest reports of the Modern Food Testing Laboratory and Training Centre. In October last, DSCC food inspectors submitted 39 food samples but the laboratory found only two of them as substandard.

Meanwhile, the operation of the food laboratory remained halted in 2015 as its public food analyst went on post-retirement leave, officials concerned said.

Previously, the percentage of adulterated food items was much higher as the samples were tested as per the standard set in the Pure Food Rules 1967.

But food samples are now being tested following the standard set by Bangladesh Standards and Testing Institution (BSTI). Whereas BSTI standard allows 5 percent fat rate, the Pure Food Rules used to allow 10 per cent in sweetmeat, edible oil and ghee.

Insiders said test results of many food items are manipulated in connivance with food laboratory officials and sanitary inspectors.

Talking to the Daily Sun, President of Consumers Association of Bangladesh Ghulam Rahman said the city corporations have the manpower to collect food samples but they are not doing their job properly to ensure safe food for all. “If their activities remain suspended, they should shut the departments. There’s no need of such a department.”

The companies that were sued include Meghna Group of Industries and Panopoly Foods Ltd.