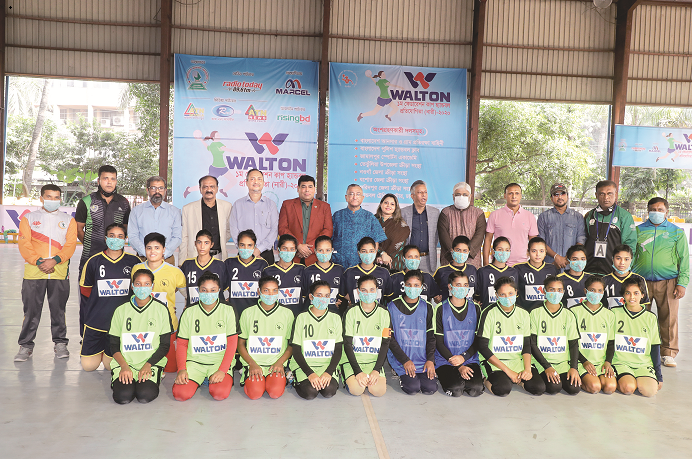 Bangladesh Handball Federation (BHF) organised the event to mark the 100th birth centenary of the Father of the Nation Bangabandhu Sheikh Mujibur Rahman.

“The chief guest of the meet has been with the handball for 40 years. He has assisted and inspired us a lot. We have a lot of memories. Girls are playing a vital role in handball. Now, we have for the first time organised the Federation Cup for girls with the help of sponsors Walton. We’re also trying to strictly follow all health measures. Handball is one of the most important games in the world. I hope these young players will help our country to reach the right place on the globe,” Kohinoor added.

Addressing the inaugural session, the chief guest Enamul Hoque Chowdhury said, “Kohinoor Vai has been my friend since 1984. He is a dedicated sports organiser. He has done a lot for the development of the Handball federation and made the school handball popular. Now, the handball federation is considered one of the leading sports federations in Bangladesh. Miku Vai, Chapol Vai are also the dedicated sports organisers of our country. I believe our entire sports fraternity is grateful to them. I especially thanked them.”

The chief guest further said in his speech that he would always continue his assistance for the development of handball.

“I don't make distinctions between men and women. These girls, who are playing today, are the ambassadors of handball. I believe that Kohinoor Vai and others will always provide you with help. I've extended my helping hands for handball and will always continue my assistance for its development,” the veteran journalist added.

“Handball players earlier got chances to study in Dhaka University due to the sports quota. I urge Kohinoor Vai to restore these quotas for our handball players. I also request him to arrange scholarships for the players from different private universities. I will help him as much as I can regard these issues,” the chief guest added.

Three matches were held on an opening day after the inaugural programme. In the opener, Jamalpur Sports Academy beat Naogaon District Sports Association (DSA) by 22-15 goals. In the other two matches, Faridpur DSA beat Handball Training Center Dhaka by 26-14 goals and Tetulia Upazila Sports Association beat Jessore DSA by 35-17, all the same venue.

The top two teams from each group will reach semi-finals on Dec 1 and 2 while the third-place decider and final will be held on Dec 3 and 5 respectively, all at the same venue. The champions will be awarded Tk 15,000, the runners-up team Tk 10,000 and the third-placed team Tk 5,000. Sponsors Walton Group is providing jerseys to the participating teams.