A civil case pending with court for 62 years 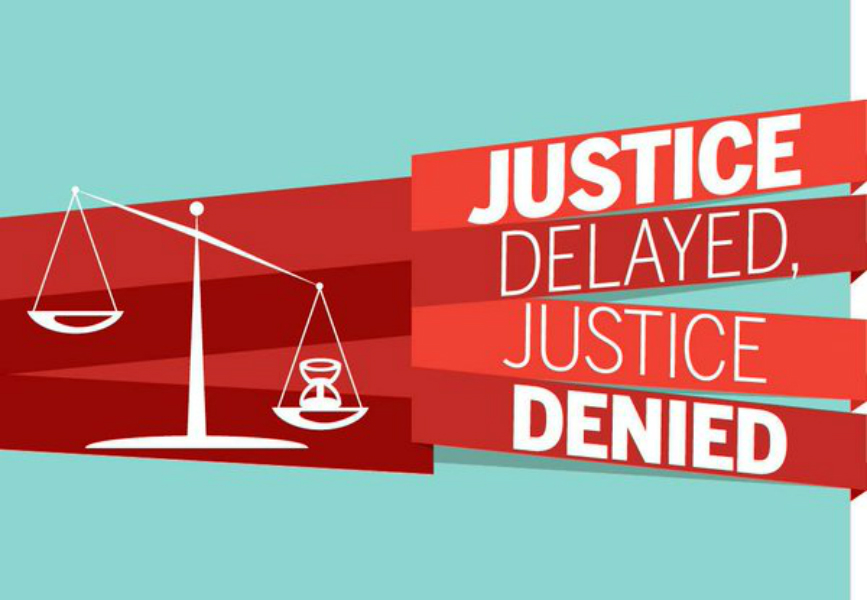 *A civil case pending with court for 62 years

Original parties to a civil suit have died crying for justice as the case is pending with court for 62 years.

Hailing from Gowainghat of Sylhet, some Asirunnesa had filed the case with local Munsif Court on December 18, 1958. The case bearing number 397/58 was filed to settle dispute over partition of a land.

The plaintiff obtained a favourable order on August 23, 1962. Defendant Abdul Ali filed an appeal with District and Sessions Judge’s Court the same year. Such court slightly modified the order which also went in favour of plaintiff. The defendant filed second appeal in 1970. The High Court, on February 8, 1989, upheld the lower court order with little modification.

The defendant again filed an appeal challenging the decree in 2000 and the appellate court upheld the previous order on August 14 the following year.

Being aggrieved, the defendant filed a civil revision petition with the High Court in 2001. The apex court, on December 6, 2015, scrapped order of the lower court and asked for appointment of advocate commissioner again to partition off the land.

In 2016, the plaintiff filed civil leave-to-appeal with the Appellate Division of the Supreme Court challenging the HC order. On October 8, 2017, the SC accepted the leave to appeal, directing the plaintiff-appellant to file a regular appeal.

The case travelled from one court to another. It signified nothing except wastage of time.

Sources claimed that plaintiff died 19 years ago and her daughter Hamida Khatun (70) is waiting to see outcome of the appeal which is pending with the Supreme Court right now.

The defendant has long since expired. Several lawyers, who moved the cases at various stages, are no more.

The case of Asirunnesa manifests the country’s protracted judicial system which results in backlog of cases. Many litigants in the land dispute cases have to wait for decades and many others die without seeing final outcome. Later, these cases are contested by the successors.

Legal experts blamed delay in issuing notice, replying by the defendant and seeking frequent adjournment for non-disposal of the cases. Backdated civil law and shortage of judges and other resources are aggravating the situation.

The litigants have been subjected to untold sufferings and financial loss due to long pending cases. The Civil Procedure Code (CPC) 1908 has become obsolete requiring to be amended. None of the civil cases is practically settled in a decade.

Any country’s capacity to dispense with justice catering to the Constitution indicates its level of development and civilisation, said former law minister Barrister Shafique Ahmed.

Many countries are going for Alternative Dispute Resolution (ADR) as the case backlog is not resolved through the traditional judicial system, he said.

“ADR may be very much effective against land disputes. Retired judges can be assigned to hold arbitration. If the land disputes are settled locally, contending parties will not come to court.”

Terming frequent time prayers and adjournment petitions by the case parties major barriers, he said the courts should settle the cases at one go.

Nearly 1,13,000 cases are pending with various lower courts in Dhaka district. The District Judge’s court itself is overburdened with 97,000 cases. The situation is worsening due to arrival of new cases.

Manzill Murshid, senior lawyer of the Supreme Court and president of Human Rights and Peace for Bangladesh, said root causes of filing cases need to be addressed.

Police and other authorities concerned will have to play due role to resolve grievance of the people and prevent litigations beforehand, he opined.

Chanchal Kumar Biswas, counsel for Asirunnesa, said usually influential people are in possession of disputed lands prompting weak opposite parties to come to the court.

The powerful land grabbers always try to obstruct and linger the case disposal.

Citing defect of CPC, he said the law allows parties to a land dispute to seek time thrice before and during the deposition. But, the CPC is silent about consequences of seeking time on frequent occasions, requiring to be amended, he opined.

Attorney General AM Amin Uddin said pace of settling civil cases by the apex and lower courts is slow.

The lower court takes time to verify documents and issue summons while shortage of bench in the apex court is causing problem, he said.

Speaking out solution measures, he said “A plaintiff needs to be examined by the trial court just after his swearing in affidavit. The apex court should get more benches. Digitisation of summons and other court proceedings is also needed.”