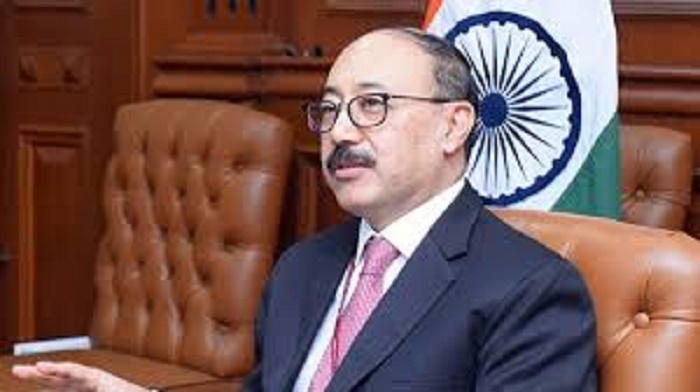 Indian Foreign Secretary Harsh Vardhan Shringla briefed envoys of Bangladesh and some P-5 countries on the Pakistani origin Jaish-e-Mohammed (JeM) terrorists who attempted to carry out attack in Jammu and Kashmir last week.

In the briefing, India informed envoys of a select group of countries, including the US and Russia, on the incident.

The group of envoys, which also included the heads of mission of France and Japan, were provided a “detailed information docket” with details of the planned attack and a list of items and ammunition recovered from the terrorists that “clearly indicated their Pakistani origins”, said a person familiar with developments who spoke on condition of anonymity.

The envoys were briefed on how the terrorists sneaked into India through an underground tunnel in Samba sector, and how preliminary investigations by police and intelligence agencies and markings on AK-47 rifles and other items have led India to conclude the terrorists belonged to Pakistan-based JeM.

The briefing by foreign secretary Harsh Shringla on the attempted attack at Nagrota in Jammu and Kashmir that was foiled on November 19 also focused on the “implications of the incident on security, diplomacy and the battle against terrorism”, the person said.

While the envoys of at least three of the five permanent members of the UN Security Council were invited for the briefing, the Chinese ambassador was not among those present, people familiar with developments said.

On November 20, Prime Minister Narendra Modi said security forces in Jammu and Kashmir had foiled a plan by JeM to “wreak major havoc and destruction” by killing four members of the group and seizing a large cache of weapons and explosives.

The four terrorists were gunned down during a gun battle on the Jammu-Srinagar highway a day earlier.

India also demanded that Pakistan should desist from its policy of supporting terrorists and dismantle the terror infrastructure on its territory.

Monday’s briefing was the first of several to be conducted by the external affairs ministry for small groups of envoys in view of the Covid-19 situation. Several secretaries in the ministry will brief heads of missions from countries in their areas of jurisdiction.

“The idea is to share information on the attempted attack as widely as possible with the international community,” said a second person.

The envoys were told during the briefing that the incident of November 19 was part of Pakistan’s ongoing terror campaign in Jammu and Kashmir and that in 2020 itself, there were some 200 incidents of terrorist violence while 199 terrorists had been neutralised.

Details of JeM’s involvement in similar incidents in the past were also shared with the envoys.

“In terms of the bigger picture, it is clear the terrorists were planning the biggest terror attack in India since the Pulwama suicide bombing of February 2019 and the implications can be guessed,” said the first person.

“This is part of ongoing efforts to sabotage the district development council elections in Jammu and Kashmir and carry out a terror attack aimed to coincide with the anniversary of the 2008 Mumbai terror strikes,” the person added.

The envoys were also sensitised to India’s concerns regarding Pakistan’s sustained efforts to destabilise the situation in Jammu and Kashmir and to subvert local elections and democracy, the people said.