The science behind your child’s tantrums 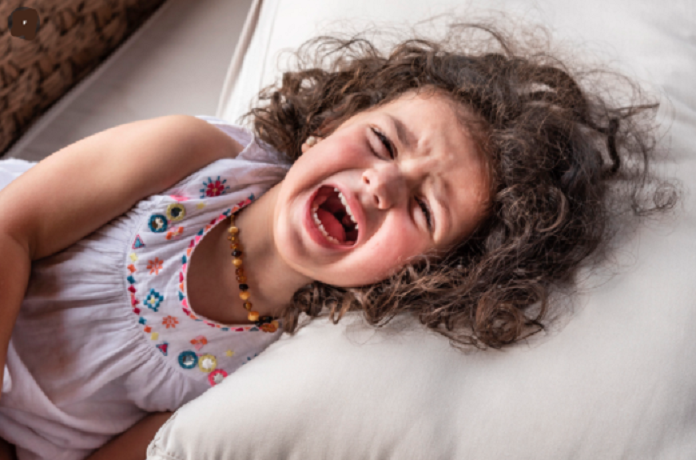 LeAnne Simpson’s 6-year-old daughter had thrown plenty of tantrums before the pandemic. But after a few weeks of lockdown, minor frustrations were now writhing-on-the-floor freakouts.
“First, she’d get so frustrated she couldn’t talk,” Simpson said. “Then she would start screaming, drop to the floor and roll around flailing her arms, often kicking or hitting me if I came close to her.”

Simpson tried every tantrum-defusing strategy she could, from playing soft music and offering a snack to squeezing her daughter between couch cushions (a calming technique recommended by some therapists).

But nothing worked except sitting quietly nearby, occasionally consoling her with words or touch. Afterward, Simpson would ask her daughter what had made her so mad. “She’d always say she didn’t know,” Simpson said.

Meltdowns in young children are a common yet complicated physiological response related to the brain’s threat detection system. Midfreakout, it’s helpful for parents to understand what’s going on beneath the surface, then to mitigate the “threat” by establishing a sense of safety.

The physiology of a meltdown

According to R Douglas Fields, a neuroscientist and author of “Why We Snap: Understanding the Rage Circuit in Your Brain,” a temper tantrum involves two parts of the brain. The amygdala processes emotions like fear or anger, while the hypothalamus partly controls unconscious functions like heart rate or temperature. Think of the amygdala as the brain’s smoke detector and the hypothalamus as someone deciding whether to put gasoline or water on the fire — with hormones like adrenaline and cortisol.

When your daughter suddenly starts wailing about sleeping alone in her bed at night, she’s probably not consciously being difficult — her amygdala detected a threat, and her hypothalamus caused her to snap.

During the stress response, your child might experience a racing heartbeat, sweaty palms and tense muscles (or just an overwhelming urge to punch you). As much as you may want to reason with your writhing child, don’t expect her to listen. For one thing, the stress response can dampen a child’s already-limited capacity for self-control, a function generally associated with the prefrontal cortex, or PFC.

“When you have a fire burning in your house, you don’t want to sit and ponder, you want your body to fire on all cylinders so you can escape,” said Dr Carol Weitzman, a developmental-behavioural pediatrician and co-director of the Autism Spectrum Center at Boston Children’s Hospital.

With a bit of logical self-reflection, adults can hit the brakes on a stress response. “When a driver cuts you off on the highway and your blood begins to boil, it’s your prefrontal cortex that allows you to think, ‘Wait a minute, I don’t have to act this way,’” Weitzman said.

But the prefrontal cortex doesn’t fully develop until adulthood, and, according to Fields, inhibition and impulse control are among the PFC’s most complicated functions: “So when you try to reason with a child, you’re appealing to a part of the brain that isn’t fully functioning.”

Dr Mary Margaret Gleason, a child and adolescent psychiatrist at Children’s Hospital of the King’s Daughters in Virginia and a consultant at Tulane University, likens child meltdowns to a pot of boiling water, with the PFC acting as its lid. “In these moments, the intensity of the feeling overwhelms the child’s ability to organize it, so the feelings get stronger than the lid,” she said.
Fortunately, with your own developed brain, you can help your kid replace the lid on the pot during a meltdown moment by using your prefrontal cortex as a surrogate.

Manage your own emotions

Before engaging with your upset child, it’s helpful to first regulate your own stress response, said Lisa Dion, a play therapist and founder of the Synergetic Play Therapy Institute in Boulder, Colorado.

If your child is safe, leave the room to take a few deep breaths or confide in a partner — whatever you need to de-escalate your own frustration.

This, according to Katie Rosanbalm, a senior research scientist at the Duke Center for Child and Family Policy, allows you to use your own calm state to calm your child.

It’s not completely clear how this works. There are most likely several physiological components, but one might involve mirror neurons, brain cells that fire in response to your own and other people’s behaviors. Watching someone run, for instance, seems to activate a similar brain region as when you run yourself.

Mirror neuron research on children is scant, and there’s still a lot to learn. But what scientists do know about this group of brain cells may help parents understand how their reactions affect their kids (and maybe even their newborn babies).

For example, mirror neurons have been found not only in the motor areas of the brain, but also in the areas that deal with emotion. The same part of your brain that lights up when you’re feeling happy may also light up when you observe happiness in others.

“So your child may not just do what you’re doing, but feel what you’re feeling,” said Dr Marco Iacoboni, a neuroscientist and professor of psychiatry and biobehavioral sciences at UCLA.

It’s also important to pair your calmness with warm and empathic cues, which can signal to the amygdala that there’s no danger, Rosanbalm said: “The amygdala stops sending out the alarm, which causes the stress response cascade to cease.”

In the calm-down process, focus more on your actions rather than your words: Your child can mirror your emotions just by looking at your nonverbal communication, like your body posture, vocal tone and facial expressions.

Dr Charles Nelson, a professor of paediatrics and neuroscience at Harvard Medical School and Boston Children’s Hospital, suggested crouching down and making eye contact with your child during the tantrum, which shows you’re listening and engaged.

You can also encourage your child to self-soothe with other types of calming sensory inputs. Offer her a fidget spinner or Silly Putty, have her push on a wall, or simply encourage her to take some slow, deep breaths. But try to introduce these coping skills before a meltdown hits so she can manage a tantrum on her own once it happens.

Don’t explain to your kid why she should calm down; this rarely works when stress is high.

Once your child’s partly developed prefrontal cortex is back online, help her form a story about the meltdown. Shanna Donhauser, a child and family therapist, suggested validating how hard the moment was and repeating back what happened.

“Then remind your child that you’re both OK and that you can still be close,” she said. “You’re still there.”

After exhausting all of the behavioural techniques she knew, Simpson tried focusing on connecting with her daughter during meltdowns instead of trying to change her behaviour.

Back in the spring, when her daughter had a meltdown about the number of strawberries in her bowl just before she needed to log on to a virtual class meeting, Simpson held her 6-year-old close as she tried to stay calm herself.

It was then that her daughter managed to articulate what was really upsetting her — it wasn’t the fruit, she said; deep down, she was sad she couldn’t hug her teacher. The two shared tears and some snuggles, then moved on with their day.

“My daughter’s tantrums sucked every ounce of life out of me,” Simpson said. “But in the end, we understood each other better and grew closer.”