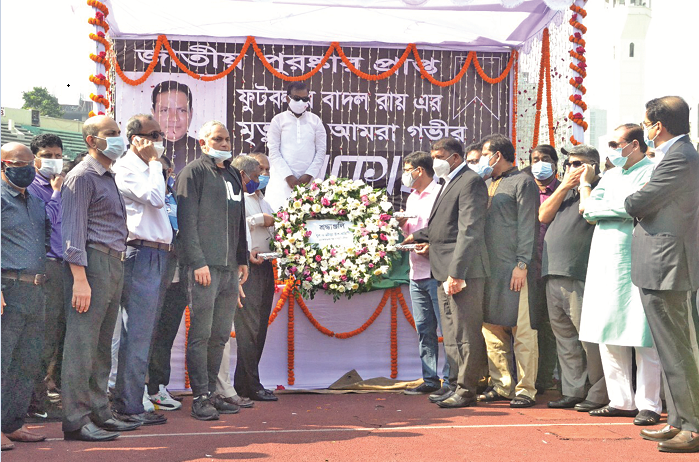 Country’s iconic footballer Badal Roy, who passed away in a hospital in the capital on Sunday, was cremated at the Basabo Kali Mondir Crematory on Monday at 02:00pm. The cremation was held after former footballers, fans, political figures, colleagues, sports organisers, journalists and near and dears paid their last respects to him at Bangabandhu National Stadium (BNS) on the day at 12:00pm.

Badal was 60 and suffering from liver cancer as well as a few other ailments. He breathed his last while undergoing treatment in Bangladesh Medical College Hospital on Sunday at 5:35 pm. He left behind his wife, a son, a daughter and a host of well-wishers to mourn his death.

Badal’s daughter Bristy Roy said, “My father was a good man, so God took him first. My father loved football very much. He is no more now, but I want football to always improve, to go ahead. My father will always be alive through his legacy in football.”

Dhaka South City Corporation Mayor Sheikh Fazle Noor Taposh said, “He was a national footballer, a pride of our football. We lost a valuable person. His dream was to bring back the lost glory of our football. Now, we should all work together to fulfill his dream.”

Bangladesh national team, who are now in Qatar for their World Cup qualifying match against the hosts, observed a one-minute silence to remember his memories before their practice on Monday. Captain Jamal Bhuyan wrote on his Facebook page: “National Award Winning Footballer and Former Vice President of Bangladesh football Federation, Mr Badal Roy's departure is an heartbreaking news for us in Qatar. I pray for the soul of this inspirational Mohammedan SC legend and a real life fighter.”

Veteran midfielder Mamunul Islam said, “We felt sorry after getting the news yesterday (Sunday). He was like a big brother to us and also a guardian. I have worked a long time under dada. He helped players a lot. He has taught us how to survive and how to go forward. We lost a legend. We will pray for him.”

Former footballer Abdul Gaffar said, “He was not only a footballer, also a sports organiser. His death is painful for us.”

Former footballer Sheikh Mohammad Aslam said, “Badal played a great role in popularising football in the country. He was not only a successful footballer, but also a great sports organiser. His absence will be felt in the sports sector.”

Former footballers Kaiser Hamid said, “We are shocked. His memories will never be forgotten. He loved football and always thought about it.”

Former footballer Imtiaz Sultan Johnny said, “Undoubtedly he is one of the top-quality athletes of Bangladesh and was a successful BFF and Mohammedan official.  He always thought about the welfare of footballers and always fought for the betterment of football until the last moments.”

Former footballer Ashrafuddin Ahmed Chunnu said, “He played for Mohammedan but we played together for the national team. He was a very good player. His behavior was very good. We have also lost a good organiser.”

Former footballer Rumman Bin Wali Sabbir said, “I have spent a long time with him. He had an immense love for football. He was a good man. He brought many victories to Mohammedan.”

The national sports awardee Badal Roy wore the black and white jersey of Mohammedan Sporting Club for close to two decades after making his debut for the Motijheel-based outfit in 1977. Following his retirement, Roy got involved in football organisation. He was BFF vice-president, BGMEA director and also acted as Mohammedan's manager in various terms.

Despite his ill health, Roy ran for the President's post in BFF's recent election, eventually losing to incumbent Kazi Salahuddin.