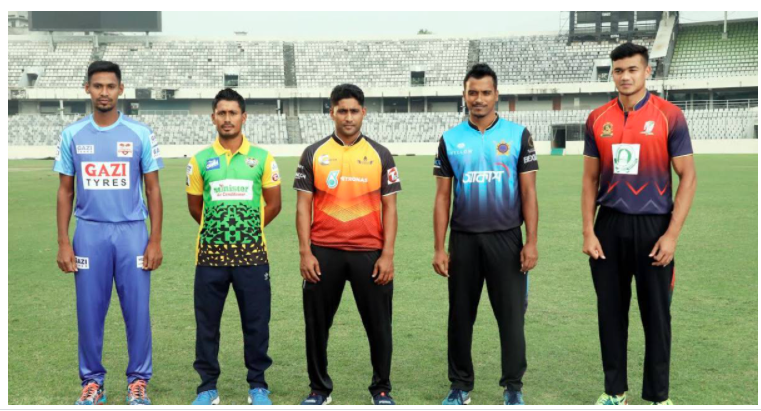 The much anticipated Bangabandhu T20 Cup, a five-team tournament played between teams of leading corporate house of the country, will begin at Sher-e- Bangla National Cricket Stadium from Tuesday.

Beximco Dhaka will take on Minister Rajshahi in the opening game of the tournament while it will be followed by a battle between Gemcon Khulna and Fortune Barishal.

Sher-e-Bangla National Stadium in Mirpur, commonly known as the ‘Home of Cricket’ for Bangladesh is gradually coming back to life after a long enforced sabbatical with the Bangabandhu T20 Cup knocking on the door following the success of BCB President’s Cup.

Bangladesh Cricket Board (BCB) in October through hosting the BCB President’s Cup marked the return of on-field cricket in a bio-secure environment but only a limited number of cricketers got to participate in the tournament.

In Bangabandhu T20 Cup a total of 80 cricketers divided into five teams will take part in a near one-month long tournament, which is set to begin on Tuesday.

Title contenders Beximco Dhaka’s skipper Mushfiqur Rahim feels that he has got the right kind of balance to take the team deep into the tournament.

“I am excited to be part of Beximco Dhaka in the first T20 tournament of the year and want to start and end the tournament on a high. I feel we have the right balance to go deep in the tournament,” said Mushfiqur.

Minister Group Rajshahi suffered a major blow on Sunday as their first pick from the players’ draft Mohammad Saifuddin twisted his ankle while playing football during warm up in the morning and left the field on crutches.

Saifuddin was ruled out for the opening game and his skipper Nazmul Hasan admitted that it was a big blow for them but nonetheless insisted that they are ready to make their presence felt even without their premier all-rounder.

“Naturally his unavailability is a big blow as he was a key player but at the same time I have full confidence in my side that we have the strength to beat any team on our day,” he said.

However, all eyes will be on the second match of the day as that will mark the entrance of Shakib al Hasan in competitive cricket after more than a year for the ban which he received for not reporting corrupt approaches to ICC.

“I don’t think there is any question regarding Shakib’s calibre and capability. I feel he won’t take time to get set in the middle,” said Mahmudullah.

His counterpart Tamim Iqbal of Fortune Barishal said that it will be a big day for his national teammate but he is aware of the all-rounder's abilities and wanted to curtail his influence on the game.

The Barishal captain was however not looking to give his national teammate an inch on his return to action.

“I am certain his fans will be eager to see him. However, as it's a game for me, I will try to ensure he has as little impact as possible on the match (today),” concluded Tamim.