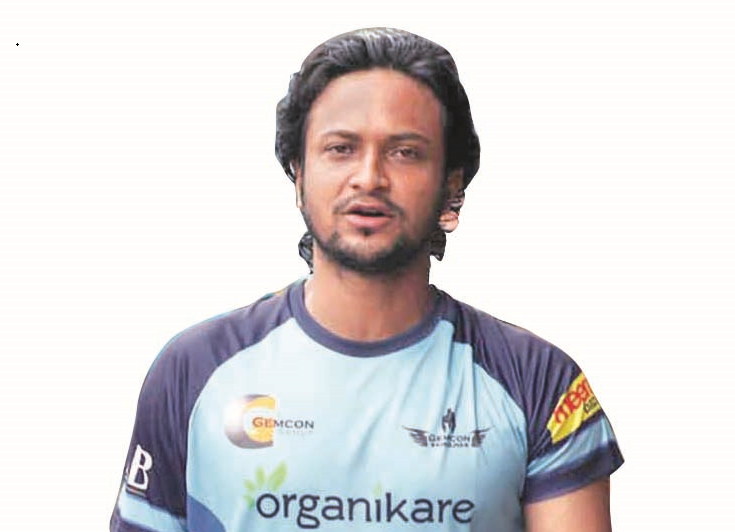 Bangladesh ace all-rounder Shakib Al Hasan returns back to a proper training session as he joined his Gemcon Khulna teammates at the academy premises of the Sher-e-Bangla National Cricket Stadium on Saturday.

On the eventful day, all the other four participating side began their preparation for the upcoming Bangabandhu T20.

While Shakib entered the field, his so-called gunman didn’t run beside him, unlike the previous time when he was having his individual practice at the SBNS that turned out to be a major headline across the world.

Bangladesh Cricket Board on Wednesday appointed a personal security guard for Shakib Al Hasan following a threat by an extremist.

The veteran all-rounder was forced to make a public apology over his recent visit to Kolkata.

The leading all-rounder is the latest target of increasingly vocal Islamists who have also staged huge anti-France rallies in recent weeks over the publication of cartoons of the Prophet Mohammed.

However, the gunman Motaleb was seen running behind him keeping a good distance though at that point he wasn’t carrying any gun with him.

Shakib, who had an individual session at the academy indoor in the morning, was greeted briefly by Tamim Iqbal at the academy entrance where the left-handed was chatting with pace bowler Al Amin Hossain.

Shakib’s arrival at the academy premises looked to be the highlight of the morning session as he seemed to hog all the highlights from the photographers despite the presence of other national stars.

“He looked quite good and I am sure he will be totally prepared before the start of the tournament,” Gemcon Khulna’s coach Mizanur Rahman told The Daily Sun on Saturday.

“Basically we will know his actual condition once the game starts but otherwise he looked to in good condition,” he said.

Beximco Dhaka and Fortune Barishal were the first team to start their preparation for the upcoming Bangabandhu T20.

Dhaka’s head coach Khaled Mahmud had a brief team meeting before the start of their campaign that will be led by Mushfiqur Rahim.

Tamim Iqbal, who will lead Fortune Barishal, also sweats it out in the middle of the academy premises following his arrival from PSL.

Gazi Chattogram and Minister Rajshahi had their session as well in the academy premises and it looked SBNS got some fresh air after a long time following cricket was halted for the most part of the eight months since the start of the corona pandemic.

Only Mahmudul Hasan Joy of Gazi Chattogram tested positive during the Covid-19 test of the cricketers, officials and other stakeholders of the five teams of the upcoming Bangabandhu T20 Cup underwent a Covid-19 test on Friday.

The BCB had already created three categories with the A category comprising players and match officials, B category involving the broadcasters and C category for groundsmen.

BCB would execute three layers of bio-bubble, comprising a hotel, stadium and Mirpur KaraPalli in which the players, officials, broadcasters, groundsmen and others would stay.

The ground floor of the academy premises will be used as an isolation center during the tournament.

“The cricketers will enter into the bio-bubble environment today (Sunday) as some of them will enter the hotel in the evening and hopefully from tomorrow we can start the journey in the bio-bubble,” BCB chief physician Debashish Chowdhury told The Daily Sun on Saturday.

The players would stay in Hotel Sonargaon while broadcasters will stay in Lakeshore and the groundsmen and cleaners will either stay in KaraPalli or where they are staying now.

The Bangabandhu T20 Cup which marks the birth centenary of the Father of the Nation Bangabandhu Sheikh Mujibur Rahman, is also a part of BCB’s initiative to revive International cricket in the Covid-19 team.

Earlier BCB successfully organised the BCB president’s Cup which comprised three teams. Now the Bangabandhu T20 Cup will be held on a bigger scale and managing such a huge number of people in a bio-bubble would be a tougher one.

But the BCB is adamant to make it successful to give a clear message to the whole cricket world that they are skilled enough to organise cricket amid Covid-19.