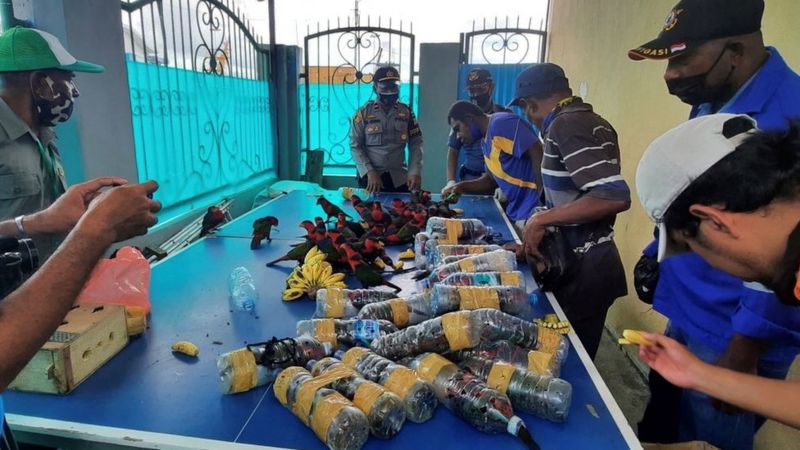 Dozens of smuggled parrots stuffed in plastic bottles have been found on a ship docked in Indonesia's eastern region of Papua.

Police said the crew discovered 64 live parrots and 10 dead birds after hearing noises coming from inside a large box.

Indonesia is home to the highest number of threatened bird species in Asia and a rampant illegal trade in birds.

The destination of the parrots found on Thursday morning in the port town of Fakfak was unclear, local police spokesman Dodik Junaidi told AFP news agency.

"The ship's crew told us that they suspected there were animals inside the box as they heard strange noises," he said on Friday.

No arrests have been made so far.

The seized birds were identified as black-capped lories, a type of parrot native to New Guinea and nearby islands in the southwest Pacific Ocean.

It is a protected species in Indonesia that is sought-after illegally to supply the pet trade, said Elizabeth John from the wildlife trade watchdog Traffic.

"Indonesia perhaps leads the charge in bird smuggling interceptions in the region, but what is needed is more arrests and a true crackdown of the players from source to market," she told the BBC.