Many firms, individuals remain out of tax net 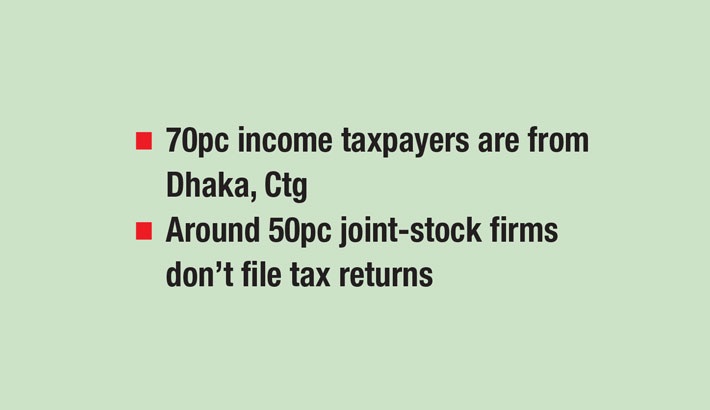 Many companies and individuals have remained out of the tax net despite efforts of the National Board of Revenue (NBR) to boost revenue collection.

Around half of the registered joint-stock companies and a large number of individuals are not paying income tax despite having taxable income.

Lack of ethical practice and willingness of the companies and individuals have been depriving the government of a huge amount of tax revenue, experts said.

Some 1.76 lakh companies and firms are registered with the Registrar of Joint Stock Companies and Firms (RJSC). Of the companies, 70,000 to 75,000 have tax identification numbers (TIN). But only 36,000 companies filed income tax returns.

It means a large number of companies are not filing tax returns though they are using TIN numbers and doing business activities in the country.

Dr. Ahsan H Mansur, Executive Director, Policy Research Institute of Bangladesh, told the Daily Sun that it is not believable that the number of taxable people are about three million only, the number would cross 10 million or more as the number of millionaires has been growing rapidly.

He said about 60 to 70 per cent taxpayers are from Dhaka and Chattogram, though Sylhet, Khulna, Rangpur, Rajshahi, Mymensingh, Comilla, Bogra and many other districts have centres of economic activities.

The number of taxpayers in these cities is not increasing as people fear of harassment by tax officials, he added.

Centre for Policy Dialogue (CPD) research fellow Tawfiq Islam Khan said many citizens have taxable income but they do not want to pay taxes in fear of harassment.

He said people think that once they enter into the tax net, they have to pay tax every year or if the income is less than the previous year, the tax officials will ask many questions.

“If the income or tax is less than the previous year, notices are sent to many taxpayers from the tax circle office asking to explain the fall in income. If you want to pay taxes again, you will have to submit various documents. All these hassles are reducing the interest in paying taxes,” said Tawfiq who conducted a study on the issue.

Meanwhile, revenue collection on average grew by 10.20 per cent in the last five fiscal years while growth contracted by 2.26 per cent in FY2020 due to Covid-19-induced slowdown in economic activities.

NBR explained that the revenue collection achieved positive growth in this July- September period mainly due to an increase in import, intensified efforts of the tax authorities, and revival of economic activities.

The NBR collected an aggregate amount of revenue of Tk 499.89 billion in Q1 against Tk 480.17 billion in the same period last year, according to provisional data.