How to tell a great bedtime story 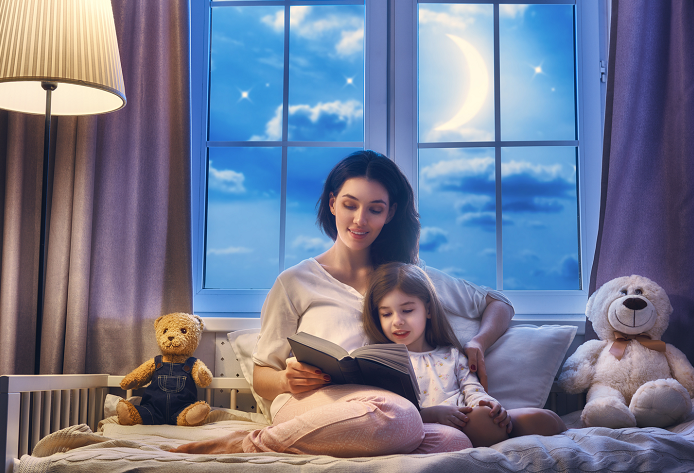 Once upon a time, there was a father. This father — known throughout the land as “Dad” — was, by trade, a teller of stories. One night, while perched upon the edge of his elder child’s bed, he was called upon to tell a story. He struggled. He stumbled and mumbled. He murmured words about a girl trying to go to school, her path blocked by some nefarious cows.

As the father spoke, his daughter seemed bored, like a movie producer screening a disappointing rough cut. She offered some notes. The girl should be a princess, she suggested. She should have a unicorn, too, one that could fly would be ideal. The father made those changes, and the story became an immediate critical success. The father vowed never to suffer such creative malaise again.

That was me more than three years ago. It marked the first of roughly 600 bedtime stories told, and counting. In telling those stories, I’ve gained a sense of what works for my daughter (princesses, witches, magic) and what doesn’t (stories with an obvious moral). I’m by no means a master — more than once, I’ve dozed off mid-sentence. And yet, I’ve learned some useful lessons along the way.

In crafting this guide, I also spoke with several experts, including the host of a storytelling podcast for children, a Grammy-nominated storyteller with 35 years of experience and a researcher who has studied storytelling. Here’s what you need to know.

You Still Need to Read to Your Kids

Let’s be clear: Reading is still an indispensable tool in your parenting tool kit. Storytelling should be a complement to reading, not a replacement. I tend to tell stories after reading a bedtime book to lights off. But you can also use storytelling anytime — to make a long car trip shorter or just to pass the time. Whenever you do, you are engaging with your child in a unique way.

“Listening to the story without the benefits of the illustrations requires the child to picture the characters and the events in their own mind,” said Rebecca Isbell, an early childhood education consultant and professor emeritus at East Tennessee State University. “They are creating the story for themselves. They are listening to it, and as they do they’re turning on that movie in their head.”

These mental movies are powerful — in her research, Isbell has found children understood (and retained) more of a story they were told out loud than having the same story read to them. “I think that’s something that gets lost with reading,” she said. “You’re focused on the words and the phrases, not the deeper meaning of it.” When you tell a story, there’s no book to focus on, for you or your child, so you can use gestures and eye contact to add drama, suspense and intrigue.

Ultimately, Isbell concluded that storytelling and reading work best in tandem to help children develop language and story comprehension, just as you want your child eating a balanced meal.

Remember the Basics of Storytelling

If you’re making up a story, remember every story should have a beginning, a middle and an end. Every story should have a conflict and a resolution. Need help? Consider the folk tale.
On “Circle Round,” the children’s storytelling podcast from WBUR public radio in Boston, host Rebecca Sheir draws from folklore as source material for entertaining, audio-only stories for kids. I’ve drawn from my admittedly limited knowledge of Homer’s “Odyssey” (which was originally passed down orally) and the Bible (David and Goliath works pretty well). This saves you the mental effort of coming up with an original story every night.

Several experts recommended stories from “Aesop’s Fables,” which has been delighting children for millennia and includes “The Tortoise and the Hare.” Why? Because for kids, the protagonists “aren’t really animals, they’re people,” Isbell said. They visualise the characters and identify with them, and the nuanced morals — slow and steady wins the race, for example — are things any kid can understand.

If you’re really stumped, consider your own story. “We all have stories — a clever way you got out of a tricky situation, a surprise that made you laugh,” said Sheir. In particular, stories from your childhood have a special resonance because, as Sheir puts it, “kids have a hard time believing you ever were a child.”

Take the Story in an Unexpected Direction

Diane Ferlatte has participated in storytelling festivals on five continents and in much of the United States, and her 2006 album of Brer Rabbit stories earned a Grammy nomination for Best Spoken Word Album for Children. She is, in short, a storyteller’s storyteller. Her advice? Use pitch, pacing and pausing to keep your child on the edge of their seat (or pillow).

“Pauses are very important,” she said. “It lets that curiosity and suspense in.” You can use strategic pauses to let your child ponder what happens next, and then take the story in an unexpected direction. Or just to make sure they’re paying attention.

Sheir seconds Ferlatte’s advice. “When you’re making up a story, the voice is so important,” she said. “You can vary your rhythm, pitch, intonation, your pacing. You can speeditup! You can slow … down … your … words. You can move your voice up! if someone is climbing a mountain, or move your voice down if they’re climbing down. You don’t have to be a musical person — we all have these musical instruments we’ve used for all of our lives.”

One word of warning: Sometimes, kids don’t want you to go full Jim Carrey. Or, as my daughter said the other night, “Please don’t use funny voices.” Her loss. My wicked witch voice is both terrifying and hilarious.

Use Your Whole Body

One advantage of telling, rather than reading, a story is that you don’t have to look at and hold a physical book, which frees your face and hands to gesture and make eye contact. It’s the difference between some guy reading a joke book and Chris Rock or Ali Wong doing standup. As Ferlatte puts it, “If books could give us sound and movement and voices and facial expression, that’d be wonderful. But they can’t.”
Use your hands to show whether something is huge or tiny, tap on nearby objects to imitate knocking on a door or whoosh your hands when something happens quickly. This physicality involves your children in the story. As Isbell puts it, when we’re telling a story to another person, “We’re dancing. We’re moving together.”

As with singing a song, you can encourage call and response, or use rhymes to keep the child actively engaged. Ferlatte recommends leaving out the end of a sentence and letting your child fill in the blank. “When you’re telling stories, you want them to be involved in the telling,” Isbell said. “We want them to be co-creators of the story, so they’re not just listening, they’re actively participating.”

This also helps if you’re hard up for material. “If you’re winging it, and running out of ideas, you can use audience participation to give yourself a break,” Sheir said. “You can even steal your kids’ ideas.”

This last tip is helpful for if and when you’re telling stories beyond bedtime — on a long car ride, for example, or to liven up bath time. The idea is to use props or live musical accompaniment, just as professionals do at festivals or on recordings.

“Your child is becoming your John Williams,” Sheir said, referring to the iconic composer of movie themes. Find an actual instrument or just two sticks “and as you tell the story, your child scores it. Or you can let your child take the lead — if they speed up, you speed up the action. If they slow down, you slow down, too.” You can also employ techniques like exquisite corpse, in which everyone takes a turn advancing the story. Or use Rory’s Story Cubes, in which you roll dice to determine where a story goes next.

In a time when physical bookstores and libraries remain off-limits for many of us, storytelling is a way to introduce new tales into our daily life. It’s also a way to bond with your child, to tap into her natural imagination while, perhaps, reawakening yours. In our home, I’m aware that Mom is the preferred parent for, well, almost everything — but storytelling remains exclusively my domain.

Like a long-running TV show, my stories are largely familiar and predictable, and yet my daughter eagerly asks for another instalment every time I put her to bed. Oh, and it’s a rare moment in life where telling a story that literally puts someone to sleep counts as a win. So while I can’t promise that you’ll live happily ever after, you can introduce a little creativity into a stale and sometimes-challenging bedtime routine.