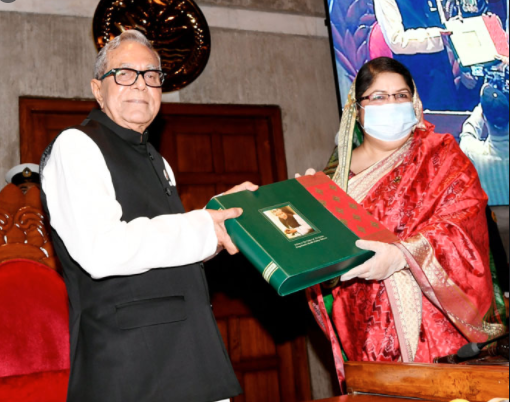 Jatiya Sangsad Speaker on Monday presented a number of books on Bangabandhu’s life and politics to president M Abdul Hamid as the president had delivered speech at the beginning of the 2nd day of the special 10th session of the eleventh Jatiya Sangsad held marking the Mujib Borsho.

“Jatiya Sangsad Speaker Dr Shirin Sharmin Chaudhury presented a number of books written on the life and politics of Bangabandhu Sheikh Mujibur Rahman to President M Abdul Hamid”, according to the session.

A number of books titled ‘Bangabandhur Asomapto Attojiboni (Bangabandhu’s Unfinished Autobiography), Karagarer Rojnamcha and Amar Dekha Nayachin which have been published with keen interest and edited by Prime Minister Sheikh Hasina, said the president in his speech.

“Those autobiographical books have created an enormous scope to know about the life and works of Bangabandhu for the new generations home and abroad”, the president added.

“I hope country’s topmost politicians, historians, academicians, researchers and journalists would play a pivotal role to disseminate the life, works and ideology of Bangabandhu throughout the world”, said the president in his speech.