Fast-track projects back on track 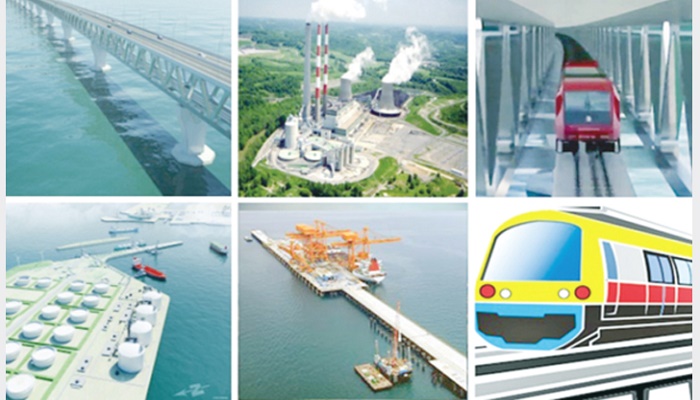 The government’s priority schemes categorised as ‘fast-track projects’ have started recovering from corona impacts after facing some setback during the lockdown period.

Most of the fast-track projects have now returned to a nearly pre-corona situation as foreign project experts and workers have returned to work or in the process of returning to work, official sources said.

Besides the pandemic, unusual floods also hindered the work of the most important Padma Bridge project with lingering span mounting work for four months.

The project also gained pace from last month after the water level in Padma River started to recede. A total of four spans of the bridge were installed last month. Project engineers say the rest of the spans will be installed by December.

“It is true that the mega projects faced some hiccups because of the pandemic as Bangladesh is also going through the crisis like the rest of the world.” commented a planning commission high official.

However, the government has tried to allocate enough money for these projects so that their implementation is not hampered, the official said, also claiming that the projects are now moving fast.

“The economy is now making a turnaround after the lockdown and fast-track projects are gaining momentum as well as foreigners are returning to work,” General Economics Division (GED) Member Dr Shamsul Alam said.

“Once these projects are complete, the country’s economy will see a big change,” he added, also emphasizing greater oversight in the projects for more acceleration.

The dream project is being implemented at a cost of Tk 301.90 billion. In the current fiscal year, the government allocated Tk 50 billion against this priority project.

In the first quarter of FY21 stretching from July to September, slightly over Tk 3.74 billion or 7.48 per cent of the allocated money under ADP could be spent. So far, the project’s cumulated expenditure up to September stood at Tk 237.96 billion.

Metro rail: The metro rail line-6 project from the capital’s Uttara to Motijheel is being implemented from July 2012 to June 2024 period.

In the first quarter, Tk 3.37 billion or 6.08 per cent of the Tk 55.43 billion ADP allocation for FY21 was spent against the important project.

Overall, the project has so far seen 53.37 per cent progress as its cumulated expenditure stood at Tk 117.35 billion.

Rooppur nuke power plant: the country’s lone nuclear power plant is being set up at Rooppur, Pabna at an estimated cost of Tk 1,130.93 billion.

Tk 156.91 billion has been allocated against this project in the current fiscal year, but its first quarterly expenditure was Tk 7.20 billion which was 4.48 per cent of the yearly allocation.

The project’s overall as well as financial progress stood at 28.70 per cent with Tk 324.59 billion cumulated expenditure from the beginning, suggest the latest progress report.

Matarbari power plant: The coal-fired power plant project is being implemented at Cox’s Bazar’s Matarbari at cost of Tk 359.84 billion.

The project’s physical progress till September stood at 34 per cent while financial progress was 38.9 per cent with Tk 140 billion cumulated expenditure.

Payra deep seaport: Infrastructure and other necessary facilities are being set up for the deep seaport project under a preliminary scheme at a cost of Tk 33.51 billion.

Tk 6.40 billion was allocated for the project this year. But 11.8 million 0.3 per cent could be spent in the first quarter of FY21.

So far, the project’s physical progress was found at 72.39 per cent and financial progress 78.04 per cent with Tk 26.14 billion total expenditure until September.

Padma rail link project: The government has undertaken the 169km Dhaka-Jashore rail line project at a cost of Tk 392.47 billion to establish a direct road link between the capital and the south and southwestern districts once Padma bridge comes into operation.

ADP allocation against this China-funded project was Tk 36.85 billion this fiscal. During the July-September period, its expenditure was Tk 5.75 billion or 15.71 per cent of the yearly allocation.

The project’s financial progress is 33.19 per cent as the implementing agency managed to spend Tk 130.26 billion so far since the start of the project. The physical progress was 26.23 per cent.

Rampal power plant: The coal-fired power plant is being set up at Rampal near Sundarbans at a cost of Tk 160 billion with Indian assistance. Tk 44.87 billion was allocated this fiscal for the priority scheme of the government.

But in the first quarter, the implementing agency managed to spend over Tk 2.60 billion which was 5.80 per cent of the allocation.

Its financial progress is 56.55 per cent with over Tk 90.47 billion cumulative expenditure so far. Physical progress 51.83 per cent.

Dohazari-Cox’s Bazar-Ramu-Ghundhum rail line: The project has been designed to set up a single-track dual gauge rail line from Dohazari to Ghundhum near Myanmar border to promote tourism and regional connectivity. Its total cost is Tk 180.34 billion.

In the current fiscal’s ADP, Tk 15 billion was allocated. In the first three months, yearly expenditure was Tk 1.56 billion or 10.37 per cent of the allocation.

Total expenditure against the project stood at Tk 50.22 billion until September to post 27.84 per cent financial progress. Physical progress of the project was 43 per cent.