Protest against Defamation of Prophet

Vested quarter out to create unrest 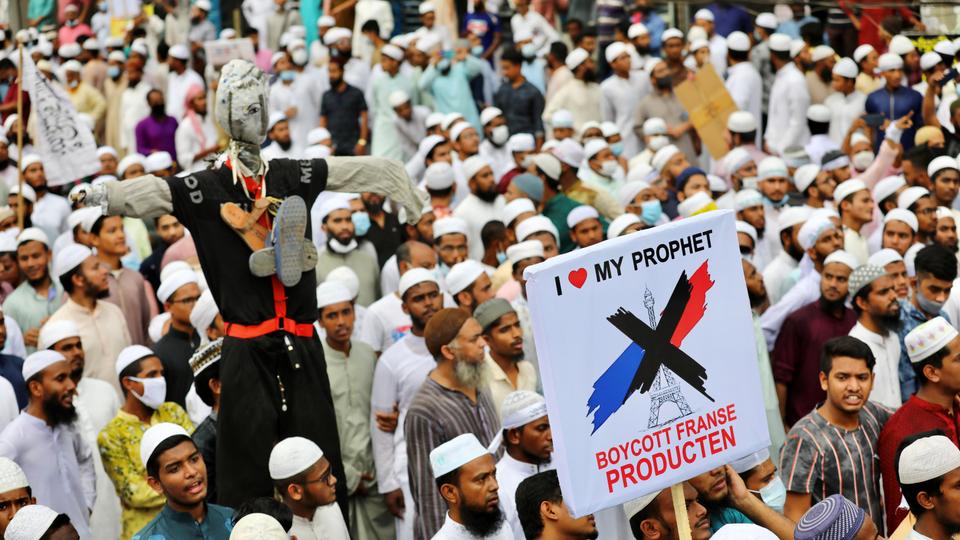 A vested quarter is trying again to create unrest in the country, cashing in on the growing protests against the French President’s derogatory comments on Islam and Prophet Muhammad (SM).

The quarter is hatching conspiracies to cause unrest in the country by spreading various rumours through different social media, including Facebook and YouTube.

The conspirators are involved in different aggressive, fundamentalist and even militant outfits, detective sources said.

Earlier, such groups became active in causing trouble for the government by spreading rumours and propagandas.

Some days ago, a section of anti-government politicians also tried to create anarchy and defame the government by instigating the protests over the recent rape incidents.

Referring to the rape incidents in Savar, Sylhet and Noakhali, the vested quarters were hatching conspiracy to use the protests and give political colour to all the incidents.

Even they were trying to blame the law enforcers who worked hard to arrest all the accused quickly.

As part of their blueprints, the groups by spreading rumours over insulting Islam and Prophet Muhammad (SM), child-lifting and communal riot among the Hindu-Muslim. By spreading such fabricated and illogical rumours, the vested group attacked and torched many Hindu houses in Nasirabad area of Brahmanbaria.

On charges of child lifting, a middle-aged woman was beaten to death in the capital.

Detective sources said rumours are being spread in a planned way from inside and outside the country. A vested quarter is spreading the rumours to halt the progress of the country.

They (the vested quarter) have resorted to this easy way of spreading rumours through Facebook and other social media. So far, 60 Facebook accounts, 25 YouTube links and 10 online news portals have been shut down.

In such a situation, members of different intelligence branches are reportedly monitoring different contents uploaded on Facebook, YouTube and other online websites.

As part of cautionary measures, the police administration on Monday urged the countrymen not to pay heed to any rumour and false information. The force also requested all to contact police personnel through the national emergency service 999 to know the truth.

“Vested quarters are trying to destabilise the country by spreading sensitive religious issues on social media.”

“The people of our country are peace-loving. They always stand against cruelty, violence, barbarism and radicalism,” he added.

Two days ago, Shahidunnabi Jewel, son of Abdul Wazed Mia of Shalban in Rangpur city and a former librarian of Rangpur Cantonment Public School and College, was beaten to death by a mob in Lalmonirhat’s Patgram upazila on charges of defaming the Quran.

Police arrested five more people from Patgram upazila on Sunday night in connection with the lynching of the young man. On Sunday,  houses of several Hindu families were vandalised and burned by some radical Islamists in Cumilla over rumours about an alleged Facebook post slandering Islam.

The households were vandalised and set afire after a Bangladeshi man, who lives in France, allegedly praised President Emmanuel Macron for taking steps against “inhumane ideologies” after a teacher in Paris was decapitated for showing caricatures of Prophet Muhammad (SM).

Police arrested the headmaster and another man on charges of hurting the religious sentiment.