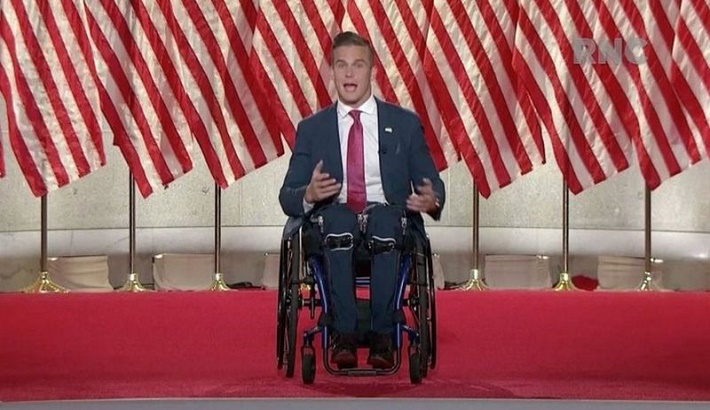 A political newcomer, who in June beat Donald Trump's nominee in a Republican primary, is now set to become the youngest Congressman since 1965.

The motivational speaker and real estate investor only turned 25 - the minimum age for Congress - in August.

But the lawmaker, who is a wheelchair user, has already courted controversy.

Mr Cawthorn is potentially the third-youngest person in US history to be elected to Congress. He is a few months behind Jed Johnson Jr, a representative for Tennessee, who took office in 1965 seven days after his 25th birthday.

The youngest House member is believed to be William Charles Cole Claiborne, another Tennessee lawmaker. He was elected in 1797 on a Democratic-Republican party ticket, according to US House records, and would have been aged either 21 or 22. However, his gravestone says he was 23, while other sources indicate he was 24.

He served in Congress despite not meeting the constitutional age requirement.

Who is Madison Cawthorn?

During his primary campaign, Mr Cawthorn, who is partially paralysed after a car accident in 2014, criticised his opponent for refusing to take part in debates, saying in one video that he would not "cower behind big-name endorsements".

Despite this, he has repeatedly stated his support for President Trump.

Mr Cawthorn's opponents immediately seized on his remarks, with some suggesting he was a white supremacist.

He has repeatedly dismissed the allegations. In an August post on his Facebook page, he wrote: "When I visited the Eagle's Nest this was the history I had in mind. It was a surreal experience to be remembering their joy in a place where the Nazi regime had plotted unspeakable acts of evil."

Critics have also accused Mr Cawthorn of creating a misleading impression that he was due to attend the US Naval Academy before his car accident - an image that has been central to his campaign.

On his website, Mr Cawthorn said he was nominated to the Academy but "[his] plans were derailed" after the car accident. But in a 2017 deposition, he admitted that his application had been rejected before the crash.

He denies the allegations.