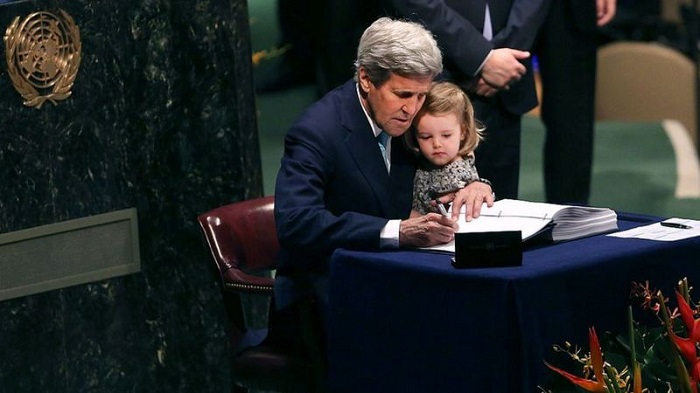 After a three-year delay, the US has become the first nation in the world to formally withdraw from the Paris climate agreement.

President Trump announced the move in June 2017, but UN regulations meant that his decision only takes effect today, the day after the US election.

The US could re-join it in future, should a president choose to do so.

The Paris deal was drafted in 2015 to strengthen the global response to the threat of climate change.

It aims to keep the global temperature rise this century well below 2C above pre-industrial levels and to pursue efforts to limit the temperature increase even further to 1.5C.

Why has this taken so long?

The delay is down to the complex rules that were built into the Paris agreement to cope with the possibility that a future US president might decide to withdraw the country from the deal.

Previous attempts to put together a global pact on climate change had foundered because of internal US politics.

The Clinton administration was unable to secure Senate backing for the Kyoto Protocol, agreed in 1997.

So in the run up to the Paris climate talks, President Obama's negotiators wanted to ensure that it would take time for the US to get out if there was a change in leadership.

Even though the agreement was signed in December 2015, the treaty only came into force on 4 November 2016, 30 days after at least 55 countries representing 55% of global emissions had ratified it.

No country could give notice to leave the agreement until three years had passed from the date of ratification.

Even then, a member state still had to serve a 12-month notice period on the UN.

So, despite President Trump's White House announcement in June 2017, the US was only able to formally give notice to the UN in November last year. The time has elapsed and the US is now out.

What will the withdrawal mean in practice?

While the US now represents around 15% of global greenhouse gas emissions, it remains the world's biggest and most powerful economy.

So when it becomes the only country to withdraw from a global solution to a global problem it raises questions of trust.

For the past three years, US negotiators have attended UN climate talks while the administration has tried to use these events to promote fossil fuels.

"It's definitely a big blow to the Paris agreement," said Carlos Fuller, from Belize, the lead negotiator for the Alliance of Small Island States in the UN talks.

"We actually worked very hard to ensure that every country in the world could accede to this new agreement. And so, by losing one, we feel that basically we have failed."

Others say that the US pull-out is partly due to the failure of the Obama administration to have the Paris agreement ratified by the US Senate.

"What Obama did at the end of his second term was fundamentally undemocratic, to sign up to a Paris agreement without going to the Senate and the Congress and instead doing it via executive order," said former UN climate chief, Yvo De Boer.

"And then, in a way, you're setting yourself up for what has happened now."

Could the US re-join the agreement?

In fact, while on the campaign trail, Joe Biden said he would seek to re-join as soon as possible - if he was elected President.

Under the rules, all that is required is a month's notice and the US should be back in the fold.

However, even if the US chose to re-enter the agreement, there would be consequences for being out - even for a few months.

"We know that the UK and the EU and the UN Secretary General are planning an event on 12 December, on the fifth anniversary of the conclusion of negotiations for the Paris agreement, where they're going to try to drive more ambition," said Andrew Light.

"Under the Paris rules, the US will not be able to participate in that."

Not everyone in the US is upset to leave the Paris agreement?

President Trump made leaving Paris a key part of his election platform in 2016, tying it into his vision of a revitalised US with booming energy production, especially coal and oil.

His perspective on the Paris agreement was that it was unfair to the US, leaving countries like India and China free to use fossil fuels while the US had to curb their carbon.

"Being out formally obviously hurts the US reputation," said Andrew Light, a former senior climate change official in the Obama administration.

"This will be the second time that the United States has been the primary force behind negotiating a new climate deal - with the Kyoto Protocol we never ratified it, in the case of the Paris Agreement, we left it."

"So, I think it's obviously a problem."

How is the US pull out being viewed?

Although this has been a long time coming, there is still a palpable sense of disappointment for many Americans who believe that climate change is the biggest global challenge and the US should be leading the fight against it.

"The decision to leave the Paris agreement was wrong when it was announced and it is still wrong today," said Helen Mountford from the World Resources Institute.

"Simply put the US should stay with the other 189 parties to the agreement, not go out alone."