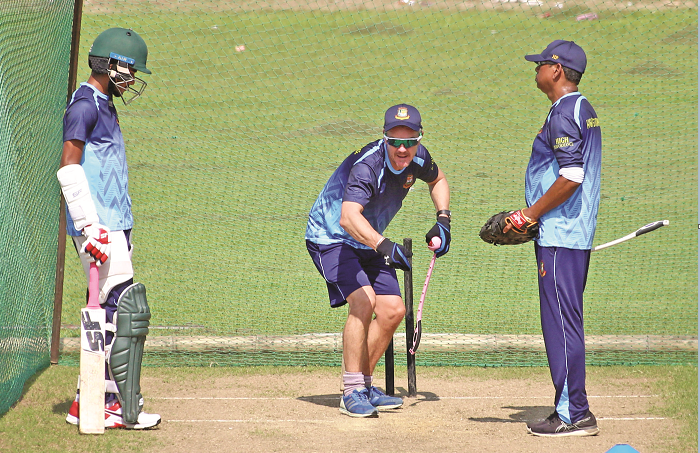 Bangladesh Cricket Board (BCB) High Performance Unit Head Coach Toby Radford is eyeing to groom Test cricketers through working on their techniques in the HP camp.

BCB appointed former West Indies Batting Coach Toby Radford as the Head Coach of the HP unit for a period of one year beginning from August 2020 after the post went vacant following the resignation of Simon Helmut.

“I was with the West Indies team when we played Bangladesh two years ago. All the Test matches were over in three days. Pace of Shannon Gabriel and the rest of the fast bowlers blew away Bangladesh’s top-order.

Then we saw a very different Bangladesh side in ODIs. They won both the ODIs and T20Is. I have told the board that I want to create a group of players that can really stand up in Test cricket. They can be technically tight, face 90 miles an hour and bat for five hours. They can bowl in long spells,” said Radford.

“The whole purpose of this camp is to improve the players’ techniques when it comes to red-ball cricket. We have got bowling machines turned up, short and swinging. It is designed to test technique and work on the areas that need working on. According to the local coaches, the young players don’t play a lot of red-ball cricket. The mindset is about scoring all the time. The problem is when you got three slips and a gully and they are coming at you, you want to be behind the ball and leaving the ball. You don’t want to be inside it,” said Radford.

Toby stressed on the importance of technique and variety which is required in different formats. According to the veteran coach, mastery in red-ball cricket paves the way for cricketers to succeed in any format of the game.

“I believe that if you look at the best players in world cricket like Kane Williamson, Virat Kohli, Ben Stokes and Steve Smith, they are all good in all formats. They are all good Test players. They have a good basic technique, and once you master that, you can then develop the funky T20 stuff. I am working on making sure that they have a good, solid technique first. I threw balls for four hours this morning, and I had a bloke throwing at them at 90 miles an hour. The idea was to test them for five-day cricket,” added Toby.

“You have to leave balls and get behind balls. Duck under them, be gutsy. Get forward. Get a taste of what you get in Test cricket. It is the focus at the moment. The T20 and 50-over stuff comes later. I want to see the high-end players first. Let’s get the chassis of the car built before we get the alloys. I’d like to see Bangladesh be really competitive in Tests, but not just in Bangladesh. The only way you can play against Mitchell Starc in Australia is if you turn the bowling machine up and really get people used to it and techniques to cope with it. It is my whole philosophy,” he concluded.